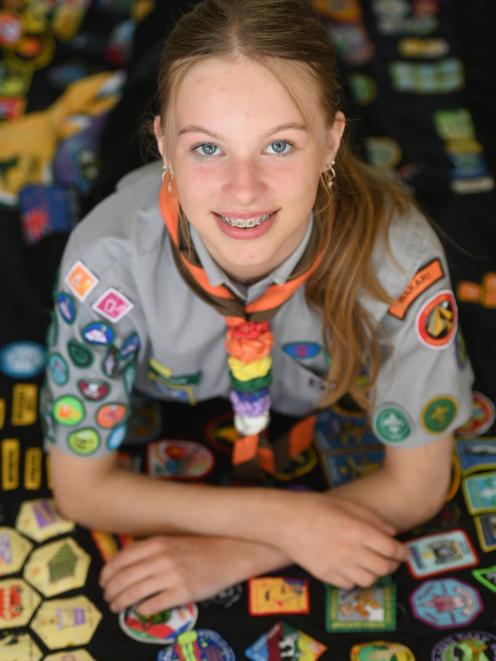 With a blanket dotted with badges collected through her scouting career, Hannah Fleming shows off her newly earned Chief Scout Award badge and certificate. PHOTO: LINDA ROBERTSON.
When Hannah Fleming got started with Scouts Aotearoa, she said, she was just a shy little kid.

Now the 14-year-old is the latest recipient of the Chief Scout Award, the highest level of scouting achievement possible in New Zealand.

She started in scouts when she was aged about 9 with the Wakari scout group and said her confidence and leadership skills had blossomed over time.

While scouting had introduced her to many things she had never done before, what she found most rewarding was working with younger scouts and helping them develop a passion for it.

A good example of this was a camp she had to organise as part of the requirements for the award.

"To go to a huge bit of bush and say ‘you know what, let’s just go abseiling or rock climbing today because it seems fun’, and ... knowing how to organise those things and how to do the paperwork for those things to do them safely and have fun in a safe environment."

Hannah is also planning to represent Scouting Aotearoa at the world jamboree in South Korea next year.

The award is the culmination of years of hard work, as she needed to earn bronze, silver and gold awards before the top gong.

The Chief Scout Award was given to about 10-12 scouts nationally each year, she said.

She received a merit badge and a certificate signed by Governor-General Dame Cindy Kiro, who is head of Scouting New Zealand .

Now she plans to move into the Venturer programme, designed for 14-to-18-year-olds, and work on achieving her Queen’s Scout award.