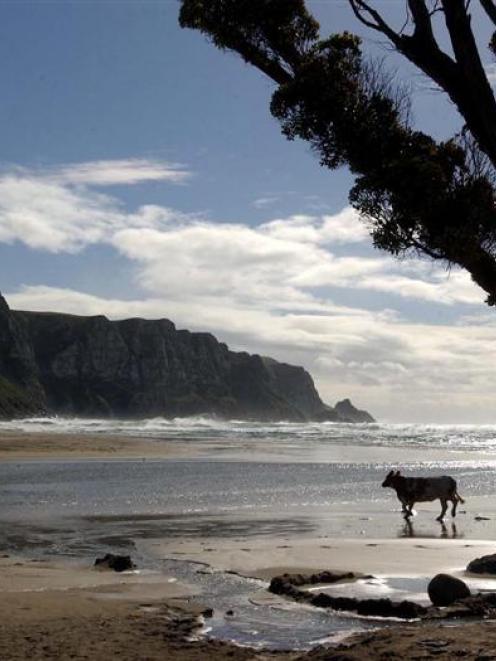 Purakaunui: At risk of inundation. Photo by Stephen Jaquiery.
Many of Otago's low-lying coastal communities are at risk from extensive inundation from storm events, a new report to the Otago Regional Council says.

The storm surge modelling study, by the National Institute of Water and Atmospheric Research (Niwa), examined 17 locations in coastal Otago, investigating potential extreme sea level events, caused by a combination of tides, storm surges and waves, that are predicted to occur within return periods of 20 to 500 years.

Storm surges result from low atmospheric pressure and wind stress, and modelling showed some of the low-lying areas of Otago were at risk.

Results showed the maximum predicted sea level in coastal Otago was 2.63m above mean sea level at Toko Mouth, on a return period of 500 years.

Minimum levels were predicted for Warrington, with 20 and 500-year return sea levels of 1.55m and 1.78m above mean sea level, respectively.

In some cases, such as the Clutha Delta and South Dunedin, the risk was mitigated by coastal dunes, but the study did not include the impact of erosion.

Dunedin Harbour's maximum sea level height was predicted to be 1.91m for the narrow strip of land around the edge of the harbour.

Rising sea levels would have noticeable effects on the depth and extent of inundation around the harbour edge, the report said.

ORC environmental engineering and hazards director Gavin Palmer said the aim was to find out how vulnerable Otago coastal communities were, so residents and local authorities had a better appreciation of the risks.

The results confirmed what people already knew and did not reveal anything of concern, he said.

The report had implications for flood schemes, urban stormwater systems and future land use so the information was being shared with the Dunedin, Clutha and Waitaki councils.

The ORC was also working on developing a regional natural hazards database which would be available to the public and would include reports such as this one and the related Niwa tsunami-risk report released in February.

The extent of inundation varied greatly between locations.

Sea level rises were expected to worsen the problem in some areas.