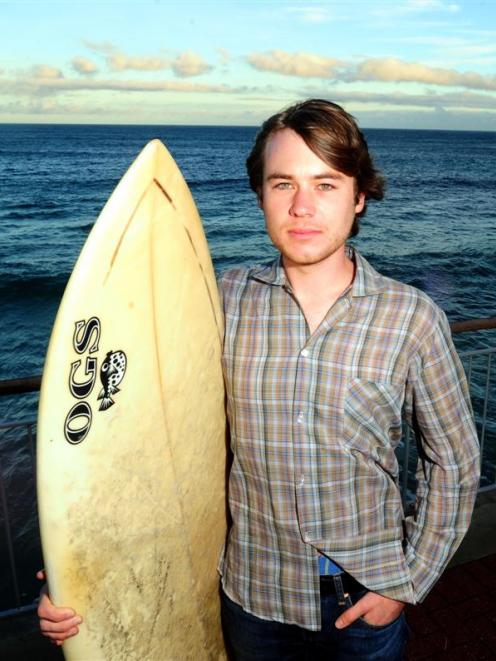 Scott Campbell, of Dunedin, called for shark nets off Dunedin beaches to be consigned to history. Photo by Craig Baxter.
Opposition to shark nets in Dunedin has been a surprise at the annual plan hearings, with 157 submissions on a subject that has only recently been raised.

That opposition continued yesterday, as the Dunedin City Council heard criticism of the cost, the harm done to other species, and the false sense of security the nets offered.

The issue began after an Otago Daily Times story in January noted the council spent $36,000 a year on the nets.

The council was the only local authority in New Zealand to maintain nets, and there had not been a shark attack in Dunedin waters for nearly 40 years.

Council staff said there was no evidence the nets provided value for money, and they offered at best a placebo effect.

Despite that, the council voted 6-7 to keep the nets in the budget during pre-draft annual plan hearings in February.

Yesterday, former assistant director and head of sciences at the Otago Museum John Darby told the hearings committee the shark nets did not protect the beaches as they purported.

"It is wasteful of resources and effort, and at the same time leads to the death of many dozens of harmless sharks each year, in addition to by-catches of both seals and dolphins."

Mr Darby criticised the management of the nets, and said little had been learned about the movements and nature of sharks in Otago waters in the past 40 years.

A significant number of sharks had been caught in the nets leaving the beaches rather than arriving at them.

Hundreds of harmless sharks had been caught, but no dangerous sharks, and the entanglement of sharks and other sea creatures was likely to attract predators such as white pointers.

"Unless nets are cleared on an almost daily basis, the nets pose more of a hazard than protection."

Scott Campbell said he both swam and surfed in the area.

The nets were both ineffective and unnecessary, and provided a false sense of security.

"In my opinion, the nets' time is up.

"This is an easy area, in my opinion, in which council can cut costs."

Mr Campbell suggested the council consider re-investing the money used on the shark nets in other water safety initiatives, such as swimming education and surf lifesaving programmes.