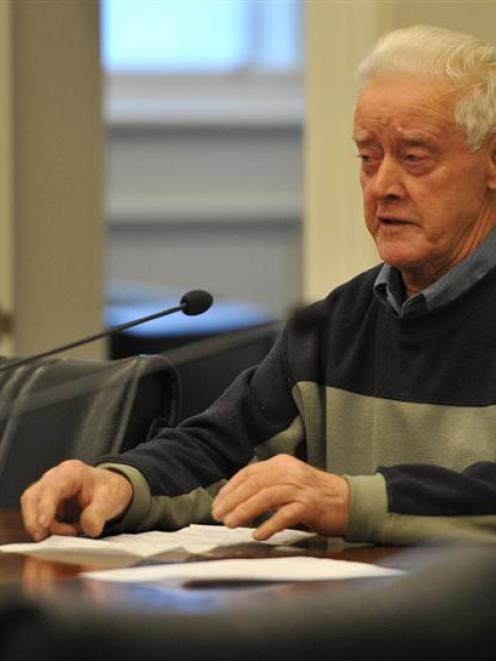 Dunedin man John Van Turnhout explains his opposition to the Otago Sports Car Club's annual hill climb at a meeting of the Dunedin City Council's road stopping subcommittee yesterday. Photo by Craig Baxter.
The sheep have been stood down - for now, at least - after organisers of a Dunedin hill climb for car enthusiasts struck a deal with an irate opponent.

Dunedin man John Van Turnhout (76) had threatened to release a ''truckload of sheep'' in the Octagon if the Dunedin City Council did not act on his concerns about the event.

He wrote to the council objecting to the day-long road closure needed for the hill climb, planned for July 21, saying he was upset at the lack of access, the noise and rubbish that would come with the event.

The event had been run most years since the 1960s, but only twice since Mr Van Turnhout bought his farm in the Three Mile Hill area in 2008.

However, the council's road stopping subcommittee yesterday voted unanimously in favour of the road closure after race organisers offered a compromise.

Otago Sports Car Club president Daniel Cresswell said the number of ''full noise'' runs up the hill could be reduced by one, from four to three, meaning the day's events would be over earlier.

He had expected competition to last from about 10am to 3pm but the club would shorten the event if that helped alleviate Mr Van Turnhout's concerns.

Mr Cresswell also agreed to other conditions, including shifting the start location further from Mr Van Turnhout's home. Volunteers would also conduct extra rubbish sweeps, guarantee the repair of any damage to his fencing and ensure emergency services could use the road without impediment.

The club would also offer Mr Van Turnhout an alternative way to spend the day, such as a meal voucher, if he wanted to escape from the event.

''We try to do as much as we can ... because we don't want to harm the event for the future,'' Mr Cresswell told the hearing.

The subcommittee's recommendation would need sign-off by the council's infrastructure services committee but Mr Van Turnhout reluctantly accepted the compromise.

The club's offers would help, but he would rather the event was moved, he said.

Asked if he would follow through on his threat to release sheep in the Octagon, he laughed.

''Don't take that too serious. I'm not hard to get along with.''