By Vaughan Elder
0 Comments
A Dunedin antique store owner feels vulnerable after being robbed by a masked man who claimed to carry a gun.

The robbery at Sue Todd Antiques in Stuart St about 3.45pm yesterday was one of two in Dunedin within the space of an hour.  Elgin Food Market in Elgin Rd was robbed just before 4.45pm. 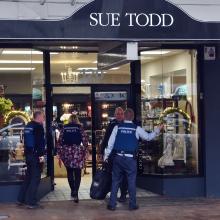 A significant amount of jewellery was stolen in the central city robbery. The assailant seemed to know what he was doing and acted like an experienced criminal, she said.

"It was a brazen and also very confident robbery."

The man, who appeared to be about 40 years old and  a European New Zealander, was   tall —  about 188cm —   walked with confidence and spoke clearly.

"When he got to the counter he said ‘Where’s your gold and silver jewellery?’," Mrs Todd said.

"And I kind of showed him where, but didn’t really look at him and then he said ‘I want your gold and silver jewellery’."

When she looked up she noticed he had covered his face in orange and yellow plastic to mask his identity. 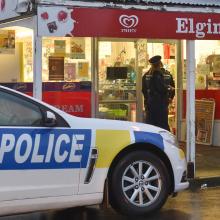 Police at the scene of a robbery at the Elgin Food Market in Mornington on Friday.
"It was quite strange."

The man said he had a gun, but Mrs Todd did not see it.

"I didn’t look at him very much because to keep my equilibrium I felt I just needed to focus on what he was wanting."

After leaving the store, he walked briskly towards Moray Pl.

She said the robbery left her shaken and she was already feeling vulnerable after McAuliffe Jewellers in King Edward St was robbed at gunpoint earlier this month.

"I’m starting to think how am I going to feel going in tomorrow," she said.

In the second incident, the offender was disturbed by a member of the public who entered the Kenmure store and saw the robbery taking place.

The person reported the incident to police.

The suspect is believed to have walked towards Forbes St following the incident.

Police were unable to provide many details on the robberies last night, including whether weapons were used in the second incident or whether the offender fitted the description of the Stuart St raid.

"Police are unsure if they are linked and are keeping an open mind about them," a police spokeswoman said.

"Further details will be shared when this information has been made available."

Detectives from Dunedin CIB were investigating both incidents.