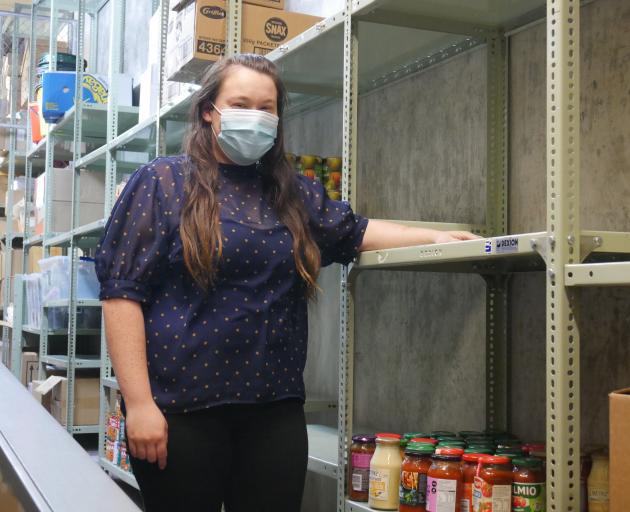 Salvation Army Dunedin Community Ministries director David McEwen said the situation was "brutal at the moment" for many families.

"Our foodbank is under the hammer, as we don’t have money to help people with their costs; but we can help with food, which allows them to pay off other things."

The Salvation Army’s financial mentors were working with people struggling to meet increased costs of living, and also those who were facing reduced hours or had lost jobs.

"People are trying to make the right choices, but often the figures just don’t add up," Mr McEwen said.

Under the Covid-19 Red traffic light setting, the foodbank was operating with reduced staffing, conducting interviews by phone and providing contactless pick-up for food parcels, he said.

At Presbyterian Support Otago (PSO), the foodbank shelves were full before Christmas thanks to the response from the community, practice manager Deb Gelling said. However, the back-to-school period plus rising inflation and cost of living meant demand for food parcels continued to increase.

"There has been a significant increase since last year in the number of food parcels going out each week," Ms Gelling said.

Between January 5 and February 4 this year, 355 parcels were given out, compared with 285 in the same period last year.

"A lot of people don’t have workable budgets and there is not enough money to cover all the essential needs," she said.

"People struggle to live week to week paying for transport to get to work or the children to school, paying for before- and/or after-school care and trying to meet basic living costs."

Some were over the threshold for support from Work and Income, so did not qualify for support, she said.

"Add this to the impact of higher living costs and it is a very real struggle."

Mosgiel foodbank co-ordinator Michelle Kerr said demand over the Christmas period was steady but had "ramped up" since schools reopened.

"Going back to school is ... an expensive time for families," Ms Kerr said.

"People put their money towards stationery and then come to the foodbanks for food."

The increases in rent and petrol prices and the lack of available housing were concerning, she said.

"I’ve got families coming in and they’re putting in $10, $20 worth [of petrol] in their car a week and that’s all they can afford.

The foodbank was happy to help people in need and still welcomed food donations.

"We can’t do it without the support of the community."

St Vincent de Paul centre and pastoral co-ordinator Sarah Strang said the foodbank was almost back to the dire situation it faced before Christmas.

"Usually, the pre-Christmas donations last us for six months, but we are already getting low and will probably run out of some items," Ms Strang said.

"For those on benefits, housing costs leave next to nothing for food — it’s really tough out there.

Like others, the St Vincent de Paul foodbank was operating in a contactless manner, and conducting interviews over the phone, she said.

Mr McEwen said he expected the difficult situation to continue for some months yet, and it was important the community pulled together.

"Everyone is doing it hard, but if we look to help each other as a community, we will get through," he said.\

Dunedin’s main foodbanks are in need of a wide range of items: