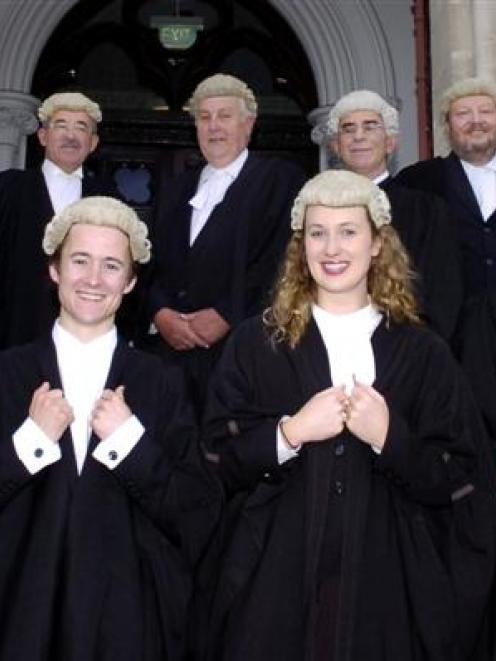 Admitted to the bar yesterday, moved by their fathers are (front, from left) Tommy Rutherford (24), Michael Stocker (23), Andrew More (23), Victoria Brunton (23), Jonathan Mirkin (23) and Catherine Andersen (27) and their fathers (back from left) Walter Rutherford, Gary Stocker, David More, Cliff Brunton, Geoff Mirkin and Len Andersen. Photo by Jane Dawber.
A Dunedin legal tradition continued yesterday as six second and in some cases third generation lawyers were admitted to the bar.

Twenty-two lawyers were admitted to the bar in a ceremony in the High Court at Dunedin.

High Court judge Justice Christine French said Dunedin had always been known for its legal families and that "wonderful, proud tradition" continued with a ceremony where six fathers moved their children's admission to the bar.

"It must be a record to have so many at one time," she said.

It was great to see that the "love of the law proved to be so enduring", she said.

The families were Walter and Tommy Rutherford, Gary and Michael Stocker, David and Andrew More, Cliff and Victoria Brunton, Geoff and Jonathan Mirkin and Catherine and Len Andersen.

Ms Anderson said in her first speech to the court, it was a daunting task to become the second generation in her family to be admitted to the bar.

Ms Brunton said she was very proud to follow in the footsteps of her father and grandfather.

Mr More, also the third generation of his family to be admitted to the bar, was moved not only by his father but also by an uncle, Fergus More, and an aunt, Mary More.

"It's an honour to follow in their footsteps," he said in his speech.