A sign on a surfboard warns drivers to be wary of children in the area. Photo: Gregor Richardson
You know who rules the roost when there is a clearly marked sign at the entrance, warning drivers of ''free-range kids'' roaming about the place.

Most people think holiday haunts are for the adults, but a row of cribs along Riverside Rd, at Taieri Mouth is most definitely about delighting children.

One of the cribs is owned by Colin and Ann Weatherall, and they said the sign on the surfboard was necessary because about 35 children holidayed with their parents in about 10 cribs, all within close proximity on the flat road, every summer.

''The surfboard is outside to protect the children because there's lots and lots and lots of them out there on the road, riding their bikes, walking, playing cricket - it's a safety thing,'' Mrs Weatherall said.

''There's nothing quite like the sound of kids playing and laughing. It's not a summer holiday without hearing the kids.''

Grandson Flynn Weatherall (12) said going hunting, trapping and fishing in the area were his favourite things to do during his holidays there. 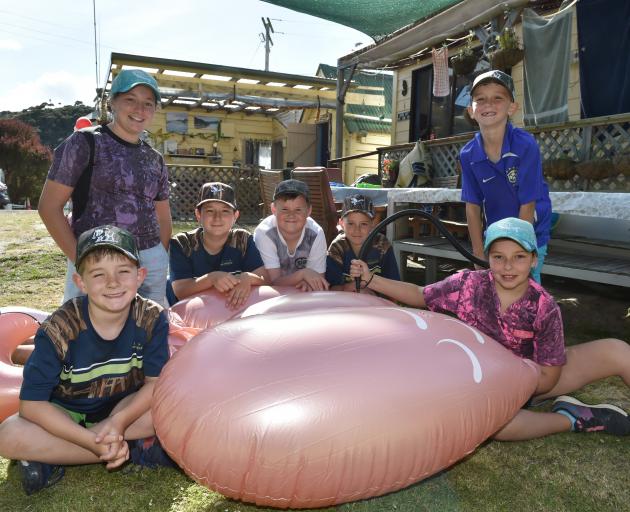 Pumping up the pink flamingo for an afternoon swim in the Taieri River at the Weatherall family crib at Taieri Mouth, are (from left) George Weatherall (7), Ella Weatherall (11), Flynn Weatherall (12), Beckham Sheridan (12), Archie Eaton (11), Thomas Weatherall (9) and Charlee Eaton (8). Photo: Gregor Richardson
It was something he did not get to do in his hometown of Mount Maunganui.

He also loved swimming and ski-biscuiting in the Taieri River, just across the road from the family crib.

He said the only thing he disliked about holidaying at Taieri Mouth was when he went ski-biscuiting in the river mouth and the boat driver (who shall remain nameless) refused to slow down, despite his screaming.

Mrs Weatherall said the family crib was bought by her parents, and she had been going there every summer for the past 65 years.

Since she was a child, much had changed about the crib.

It had been added on to, to accommodate their ever-expanding family, he said.

Once their children grew up, got married and had their own children (who often brought friends), it became necessary to build a sleepout out the back, park a couple of caravans back there as well, and pitch tents when it got really busy.

The best investment had been to build a large covered area on the back of the crib, she said.

''It's great for those rainy days. The family's so much bigger now but they can still all move outside and be comfortable and dry.

''It's a bit different from when I was little.''