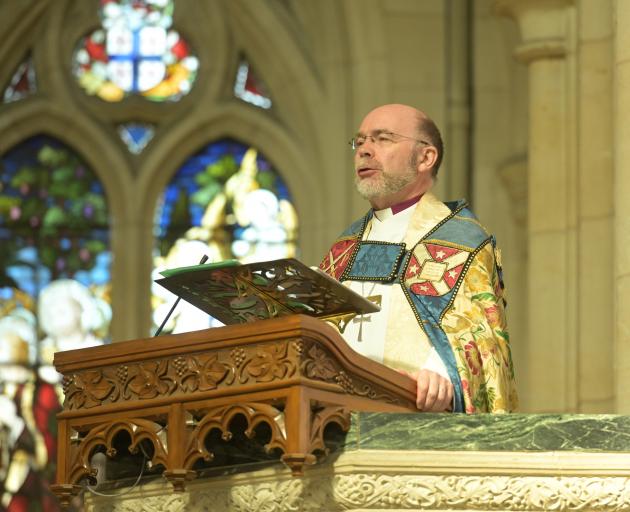 Delivering the sermon during the service to mark the centenary of St Paul’s Cathedral is the Bishop of Edinburgh the Rt Rev Dr John Armes, who said he hoped his visit could revitalise the link between the two dioceses. Photo: Linda Robertson
For a century Dunedin’s Anglican cathedral has taken pride of place in the heart of the city.

Yesterday a celebration service was held in St Paul’s Cathedral to mark 100 years since it was consecrated on February 12, 1919.

About 120 parishioners attended the service which was officiated by the Retired Bishop the Rt Rev Dr Kelvin Wright.

Guest preacher for the service was the Bishop of Edinburgh the Rt Rev Dr John Armes. Dr Armes offered warm greetings from the "Dunedin of the north" and hoped the occasion could lead to "dusting" off the link between the two dioceses.

At its most basic level, a church was a place for shelter and it was the people who gathered inside each week who filled the building with spirituality, making the space holy, he said.

"Only we can make it a place of holiness."

A well-attended service marked the centenary of the consecration of St Paul’s Cathedral yesterday.
The Bishop of Dunedin the Rt Rev Dr Steven Benford is in the United Kingdom and could not attend but in a message said it was an honour to worship in a building which had inspired people for 100 years.

"One hundred years is a long time, especially in our part of the world, and to be able to worship in a building that has inspired, comforted and challenged people over the years is an honour but also carries with it responsibilities," Dr Benford said.

He asked those gathered to consider how they could be faithful people of God in Dunedin during 2019 and beyond.

Former cathedral dean the Very Rev Robert Mills was presented with the honour of Dean Emeritus at the end of the service.