Sporty, and yet social, climbing 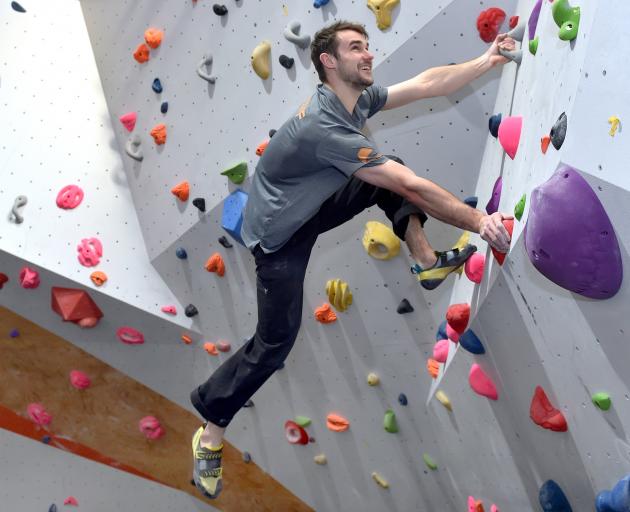 Busy setting up routes for one of the four National Indoor Bouldering Series events, which is being held in Dunedin today, is Resistance Climbing Gym co-owner Angus Kirk. PHOTO: PETER MCINTOSH
Some of the country’s best climbers have ascended and descended on Dunedin.

One of four National Indoor Bouldering Series events is being held at Resistance Climbing Gym, in Moray Pl, today.

Co-owner Mike Simpson said it was exciting the gym had been selected as a host for the event after only opening in March this year.

"We’re pretty excited to have it. It will bring in some of the better climbers from the lower South Island, Wellington and beyond.

"It was great of them to include us in that, as it gives us a chance to be a part of the national scene."

About 160 people entered across three rounds and would compete at a range of levels, he said.

The best climbers would move on to the finals climb-off, which unlike the other rounds, would be held in isolation.

It would ensure competitors did not get any ideas on how to tackle the route by watching another climber, Mr Simpson said.

The routes have been set by Christchurch climber Mark Pugh-Williams, along with a group of local Dunedin route setters, who set the gym’s regular routes.

"We’ve been preparing routes, or problems, of all different levels ... mimicking stuff that is outside, but with some parkour elements to it as well, where you jump for holds."

The routes would stay up for the next couple of weeks so that regulars who missed out on the event could try it, he said.

Resistance Climbing was opened by avid outdoor and indoor climbers Mr Simpson, Angus Kirk and Nathan Campbell, who have been surprised by Dunedin’s enthusiasm for climbing.

"The gym has been going really well. We have had lots of people signing up and the place is really busy throughout the whole week," Mr Simpson said.

"I didn’t know there were so many people who are into climbing in Dunedin — and the word hasn’t got fully out yet."

"You don’t have a whole lot of ropes and harnesses to deal with; you’re not dealing with really high heights.

"You’re enjoying movement, problem-solving, fitness, and it is really social."

Bouldering is also a newly sanctioned Olympic event this year and Mr Campbell expected its profile to continue growing.

"We have certainly been blown away by the popularity and demand for indoor climbing from Dunedin since we opened."