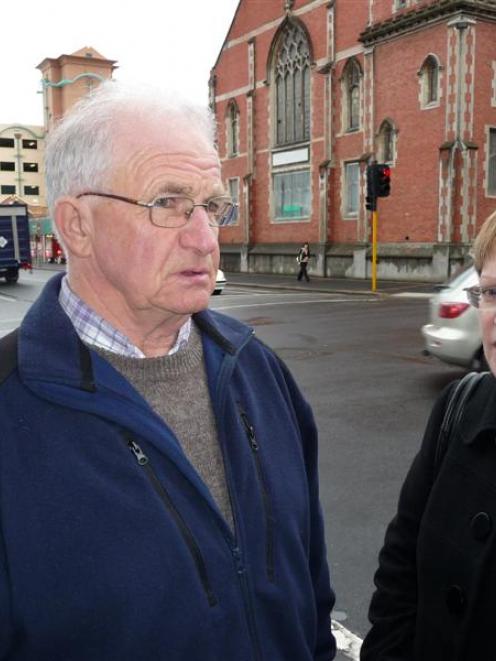 Fin Heads and daughter Wendy Collard at the intersection where Shirley Heads was killed by a vehicle while crossing the street.
There have been 200 fatal or serious crashes at Dunedin intersections in the past five years and, as part of a national strategy, the Dunedin City Council, police and the New Zealand Transport Authority have launched an intersection road safety campaign in the city. Of the seven people killed in the Dunedin incidents, more than half were pedestrians. Star reporter Bruce Munro talks to the family of one of the four victims about the ongoing impact.

It is 16 months since Mrs Heads, breaking her custom by taking a lunch break away from work, was killed by a truck while crossing the intersection of Great King St and Hanover St.

But for Mrs Heads' husband Fin, daughter Wendy Collard and other family, the trauma is still fresh.

‘‘This is only the second time I've been back here,'' Mr Heads said on Tuesday while standing across the road from where the left-turning truck and trailer knocked down and ran over his wife of 48 years.

‘‘I can't drive through this intersection any more. I'm only here today in the hope it will save others from this.''

‘‘Coming here today is like living it all over again,'' Mrs Collard said.

‘‘All the issues with grief make it so hard to get closure.''

The family does not know why Mrs Heads was walking towards George St that afternoon.

They guess it was to buy presents for up-coming birthdays. Mrs Collard was at work at the Dunedin City Council call centre when information came through about a fatal accident at the intersection.

The first Mr Heads knew about it was when police knocked on his door.

‘‘We had to come down to the hospital to identify Mum in the morgue,'' Mrs Collard said. ‘‘Some of those images don't go away.'' In a court case held in March this year the driver was convicted of causing the death of Mrs Heads by operating a vehicle carelessly.

He was sentenced to 300 hours community work, 12 months driving disqualification, and ordered to pay $6000 reparation.

Asked what changed that day, Mrs Collard said ‘‘Everything.''

‘‘You can count on one hand how many nights I've had since then without a nightmare.''

The stress put Mr Heads in hospital and, he believes, hastened his own heart problems and the death of Mrs Heads' father.

It has affected friends and extended family including a granddaughter in Australia.

‘‘She and her grandmother were so close,'' Mr Heads said.

‘‘She was just six and had to get counselling. She started taking responsibility for everybody and everything at home and school.''

Mrs Heads died 37 days before she was due to retire.

‘‘If this had been a Barnes Dance it would never have happened. She would still be with us today.''