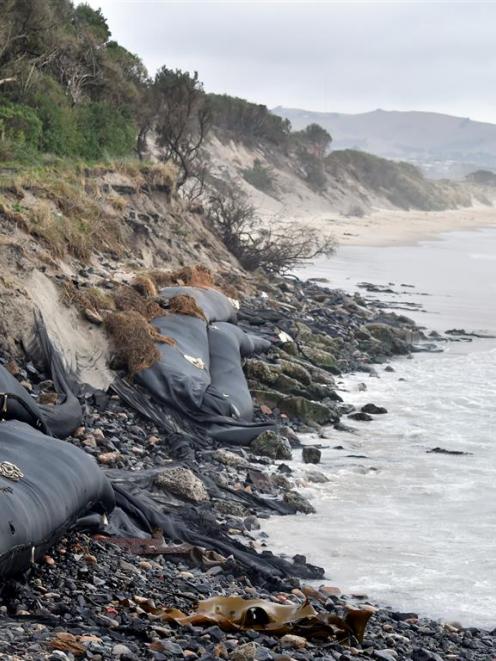 Dunedin City Council asset and commercial manager Tom Dyer said, despite the erosion, the beach was not eroded "to the extent it was at the end of last year''.

The effects of the weekend's storm came as it was revealed the project to shore up the beach's defence against erosion had again been delayed.

Work to install about 200m of sand sausages to protect the beach's dunes was due to be completed by mid-June, but had been set back by at least a month.

St Clair resident Bill Brown, who has been petitioning the council to carry out remedial work on the beach since last September, said he was concerned about the delay.

"It's already clearly too late,'' he said, pointing to the weekend's storms.

"The chances of them not getting in there [to complete the work] are very high.''

Mr Brown expressed concern at April's council meeting that if the work was not completed in a timely way houses in Victoria Rd could be at risk.

"Council has missed an easy opportunity to get these sand sausages in place during summertime 2016 and they haven't done it and the ratepayers will suffer the consequences,'' he said.

Mr Dyer, who only recently assumed oversight of the project, said delays in manufacturing the geotextile bags had led to the latest change in timeframe.

The weather had also had an effect as contractors expected to start work yesterday, but were delayed until later this week because of the weather.

It was hoped work would be completed by mid-July, he said.

Reno mattresses, which were installed in 2007 at Middle Beach, would be replaced by versions made of a different material and the cost of the project to protect the dunes had fallen from an estimated $580,000 to $548,000, he said.

The dunes had been protected in recent months as sand had been building since February.

Additional sand had been stockpiled at Kettle Park to carry out remedial work to the beach if necessary, although that work could only happen during low tide, he said.

"Downer has been awarded the contract to complete the project, which will see new sand sausages placed along the base of the narrowest stretches of dune,'' he said.

"The work will provide protection to the dunes as well as Victoria Rd properties which back on to this area.

"Tonkin Taylor will provide technical support for the project, while Octa is handling the project management.''

Earlier this month, the council agreed to spend $100,000 in the coming year to investigate long-term measures to protect Ocean Beach.