By Mike Houlahan
1 Comment
Prime Minister Jacinda Ardern has reprimanded resident doctors for continuing their five-day national strike, despite facilitation talks between their union and district health boards being scheduled for early May.

Resident doctors walked off the job at hospitals around New Zealand at 8am yesterday in what is believed to be the longest stopwork staged by doctors.

The Government has largely stayed out of the dispute and called on both sides to reach a solution, but yesterday Ms Ardern said the RDA should have suspended the strike until after the facilitation talks.

"I very much would have very hoped those issues could have been resolved at the negotiating table,'' she said.

"There is a process set down for early May. It definitely would have been preferable for that to be occurring rather than the strike that we see.''

Ms Ardern's comments were echoed by Health Minister David Clark, who said it was disappointing the strike was going ahead.

"I'm confident both the DHBs and the RDA see patient and staff safety as a priority and I urge them to put all their efforts into finding agreement through facilitation,'' Dr Clark said.

"I want to assure the public that patient safety is the priority during this strike.

"DHBs and the RDA have agreements in place to ensure life-preserving services are maintained.'' 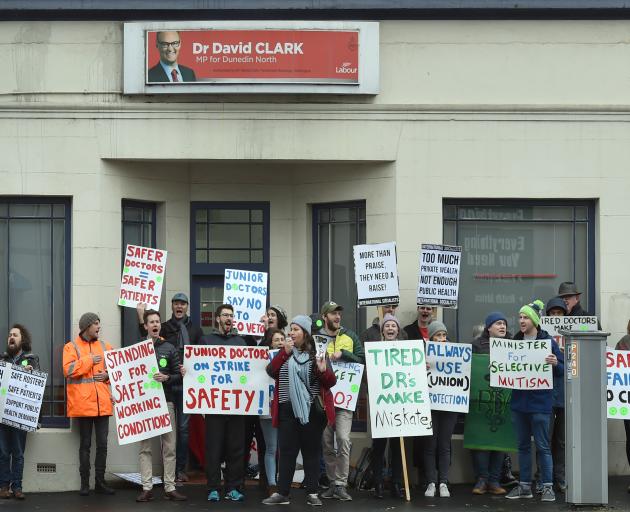 The RDA has defended its stance, saying members wanted to keep the pressure on DHBs, which it said had shown no signs of compromise so far.

Dr Clark's Albany St electorate office, in Dunedin, was visited by about 30 RDA members and supporters yesterday, who staged a noisy protest outside.

"We want to look after ourselves and keep our hours safe so we can keep our patients safe.''

Southern District Health Board chief executive Chris Fleming said hospitals had coped well on the first day of the strike.

"Our emergency departments have been busy but manageable ... The contingency plans in place are very effective.''

SDHB hospitals are open for acute services such as cancer treatments, renal dialysis, urgent surgeries and most maternity services, and emergency departments are also open.

Some elective surgery is being carried out, and anyone whose planned surgery or appointment is being postponed due to the strike will be contacted directly by the SDHB.

Perhaps our PM should shadow a junior doctor for a month before critisising them. Along with the work time she could also shoulder the responsibility they carry and the (lack of) supervision at critical times.
The DHBs have so far failed both the junior doctors and their patients. Their leaders should resign.