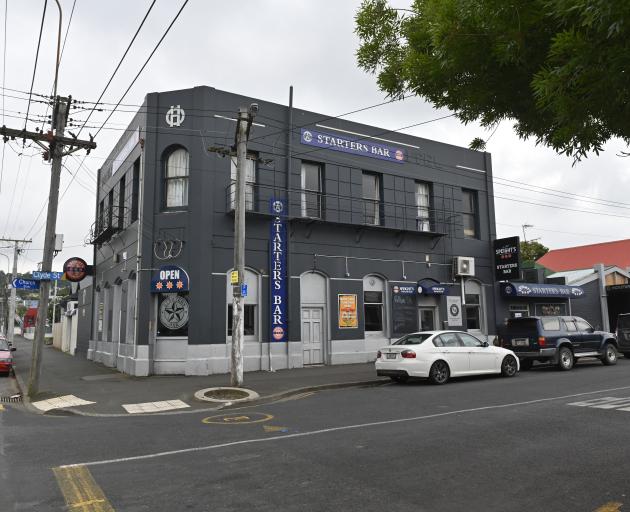 Starters Bar in Clyde St. PHOTO: LINDA ROBERTSON
Student drinking establishment Starters Bar will be able to stay open until 3am several nights a week, in a move characterised as a special Dunedin trial.

The bar has successfully applied to extend its opening hours and city officials hope it will result in a safer environment for students, who have tended to flock to flat parties or migrate to the Octagon.

Instead of midnight or 1am closing, Starters may be open until 3am on Thursday, Friday or Saturday nights.

The bar will have a one-way door policy from 2am.

"It’s a very special case. It’s the only establishment in that part of town that caters specifically for students."

The bar has been owned by the Otago University Students’ Association since 2018 and Mr Weatherall said the people running it were doing a good job.

"We are glad to receive the news that our extension of
hours was successful."

The committee did not hear the application in public, because there were no public objections and agencies such as the police were not opposed to it. The committee had to be satisfied the applicant would "operate the premises properly".

The University of Otago has in the past objected to the proliferation of venues in the northern part of the city populated by students.

However, with cheaper alcohol available from supermarkets, more parties were held in flats. The death of second-year student Sophia Crestani at a flat party last year put a spotlight on problems associated with that.

Mr Schroeder told the committee Starters had been one of the mainstay locations of student drinking since the 1990s. It had become increasingly important as other pubs catering for the student market had closed.

He commented the closure of student bars had led to more street parties and people then heading to bars in the central city. This had resulted in more alcohol-related harm.

Extending the bar’s hours would enable it to provide a more complete evening for customers, he argued.

Starters Bar would become the focus of student events.

Mr Weatherall said the bar had a special licence to stay open until 3am during
Re:Orientation this year and it had worked well.

Police commented that the application was "interesting" but did not object.

Starters was not profit-driven and existed to provide a safe space for students, he said.

The licence has been renewed for three years but will be reviewed in September next year.

Dunedin hospitality magnate Andre Shi, who owns bars and restaurants such as Catacombs and Vault 21, was in favour of the decision.

While Starters Bar was a competitor, he said encouraging students to go to bars rather than drinking at house parties would improve safety.

"House parties are the biggest disaster waiting to happen," he said.

"The more students that go into controlled environments, the less harm that will happen."

Craft Bar & Kitchen owner John MacDonald said the change would not have much of an impact on his business, as it was geared more towards families, but other bars may be affected. — Additional reporting Daisy Hudson

If only they knew how to drink. They are like children with chocolate.

Alcohol is such a safe and positive additive to young people's lives I am disappointed that they don't make it a compulsory part of every students breakfast, starting in primary school.
It is so much safer than the Devil's drug, Cannabis.