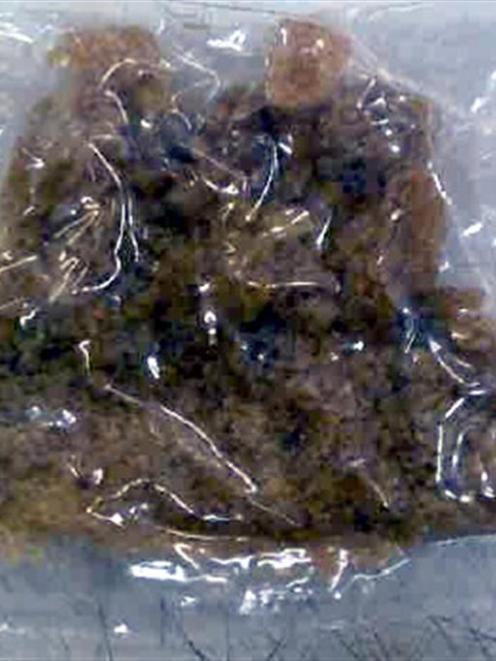 The 104g of ecstasy (MDMA) in crystalline form. Photo by NZ Police.
A ''commercial enterprise'' of party drugs sourced over the internet and destined for the Dunedin market has been seized, police say.

Two search warrants were executed in Dunedin yesterday, with police and Customs NZ officers locating thousands of dollars worth of ecstasy and LSD.

A 21-year-old Dunedin polytechnic student was arrested and is to appear in the Dunedin District Court today on charges of importing class A and B controlled drugs, as well as associated drug-related charges.

Detective Hamish Barrons, of the Southern district organised crime squad, said the man sourced the drugs from Germany and the United Kingdom via the internet.

The seized ecstasy was in crystalline form, worth about $450 per gram, he said.

However, it was likely it would have been cut down with other products ''that may not have been good for you'', with the powder sold in capsule form for the Dunedin market.

''All we can say is that it was a commercial enterprise.''

The initial interception happened at the Auckland Mail Centre and a PO Box was then monitored at an undisclosed location, he confirmed.

Det Barrons sounded a warning for those wanting to make fast money out of bringing in illegal drugs.

''Any Tom, Dick and Harry can end up working off a computer and attempt to bring that stuff across the border.

''There is huge risk for people trying to do it. If they get caught, they often don't realise the consequences will be quite serious for them.''

Last month, the Otago Daily Times carried reports of students being hospitalised after, according to police, taking ''bad drugs''.

Those drugs, believed to be MDMA, prompted the Otago University Students' Association to remind people ''partying slightly outside of the law'' to be responsible and look after their friends.

With the black market, ''you would never know what you were buying off the street''.

The National Poisons Centre had recorded 94 cases involving ecstasy, including in Dunedin, over the past five years.

Toxicologist Dr Leo Schep said a particular concern for ecstasy users was that the drug often contained some other amphetamine-like analogue.