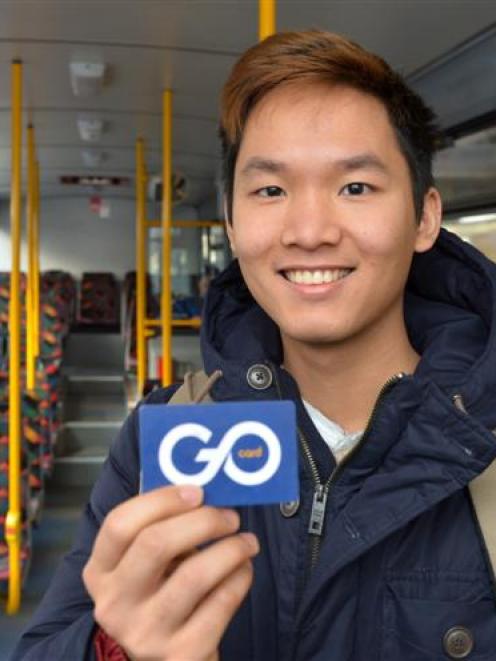 Otago Polytechnic student Ken Ha is a regular bus user who supports an Otago Regional Council decision to make permanent a student bus discount trial. Photo by Gerard O'Brien.
University of Otago and Otago Polytechnic students have heralded a recent decision to continue a bus discount initiative they say is a small saving that makes a big difference.

The trial was approved by the Otago Regional Council despite no comparable figures showing more students had used the service during the trial.

Instead, ORC support services manager Gerard Collings said the council was ''putting some faith in the students'' to take advantage of the discount.

The trial of a 25% discount for all Dunedin tertiary students began in February, for those using a GoCard and student ID.

It became permanent when the council approved its annual plan late last month.

Student associations last week received confirmation their submissions to the annual plan advocating for the discount to be made permanent were successful.

''This is a significant amount when you're living on less than $170 a week.''

''Students who use buses were spending almost 20% of their income on just 10 rides a week.

''While not as high as discounts in other regions it, has helped decrease this barrier to using buses, and students are rapt. We've had a lot of positive feedback,'' Ms Swindells said.

Otago University Students' Association president Ruby Sycamore-Smith said the move was ''awesome news'', especially for students who lived at home in Dunedin and those who lived further away from the university.

Polytechnic information technology student Ken Ha said to some people, a 25% discount might not make much difference.

But where lunch might consist of a $3 bowl of rice, the small saving added up and over a week made a difference.

Mr Ha, an international student from Vietnam, takes the bus to the city from Brockville, said the discount was important to New Zealand and foreign students alike.

Mr Collings said in terms of adult travel on the bus network, there had not been any significant lift in the numbers using services.

''We haven't been able to gauge whether we're in a decline mode, and the students have offset that, or whether it's been a transfer from one form of travel to another, and students making the most of getting a discount.''

He said students made up 20% of adult bus users.

The ORC would get a better understanding of any increase in student numbers next year.

He said in deciding to continue the trial, the council was ''putting some faith in the students that they'll migrate to public transport if the incentive's there''.

''All the concessions will be up for review through next year's annual plan process.''