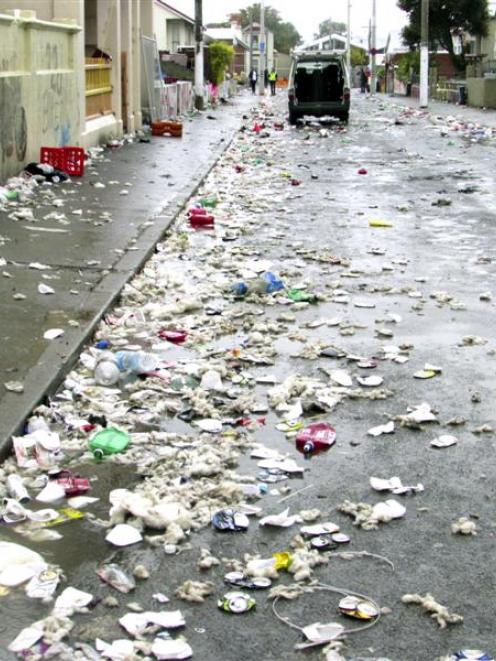 The remains of the Hyde St keg party at 6.30pm on Saturday. Photo by Christine O'Connor.
St John's South Island head has slammed the behaviour of a drunken student who shoulder-charged a St John vehicle's windscreen.

''We will not tolerate attacks on our staff or our equipment,'' St John South Island region general manager David Thomas wrote in an open letter to Otago's students, sent to the Otago Daily Times.

''In recent months we have had defibrillators removed from ambulances (as a joke) and other items taken and vehicles and equipment damaged.''

His letter came in response to the attack on a St John rapid response unit following the Hyde St keg party on Saturday afternoon.

The 19-year-old student allegedly responsible for shoulder-charging the vehicle's window and spraying the female paramedic with glass handed himself in to Dunedin police on Sunday.

He was charged with wilful damage and would appear in the Dunedin District Court on March 27, Senior Sergeant Phil McDouall said.

Twelve others were arrested at the event on charges including assaulting security staff, fighting, disorder and offensive behaviour.

''Always, after the event, everyone is sorry and seeks diversion under a legal process as it may affect future employment prospects,'' Mr Thomas continued.

''Please think how your actions may impact on the lives of others and a loss of a vehicle or piece of equipment may cost a life that cannot be replaced.

''While we remain committed to helping people in need in the community, we will not support diversion for attacks against our staff or equipment. So be very aware of the consequences of your action at all times.''

The behaviour of students at this year's Hyde St party has split landlords' opinion on the event's future.

Some have called for an end to the annual event,while others support the recent changes to the event's organisation. Landlord Neville Kershaw said he would ''prefer it didn't happen''.

''It's still a disaster waiting to happen,'' he said.

''We didn't have any damage last year so as a landlord we were OK - but ... we will have a disaster and then it's too late.''

The increasing cost of insurance for properties on the street also created problems for landlords.

He did not want to ruin students' fun but wanted the format of the event changed and for it to be held in the campus area and off the street.

''Imagine if you did that in your street and had a party and jumped around people's roofs. It wouldn't last five minutes,'' he said.

Fellow landlord Phil Seaton said recent changes had made a ''big difference'' to the safety of the event and the resulting damage.

''This year and last year went really well,'' he said.

''I have got no worries with it at all.

''The last two years I have seen a great improvement with how they control it.''

The event had history and was an exciting part of being a Dunedin student, he said.

Another landlord, who did not wish to be identified, said the party created stress for landlords, but the culture on Hyde St was the issue.

''There's been other parties that I have had huge difficulty with,'' she said.

''[The Hyde St keg party] isn't the concern; it's the pop-up parties.

''I was a student once upon a time and it's just different now.''

She had heard of a landlord on the street who could not get insurance because of the volume of claims and agreed that it should be hosted elsewhere.

''I'm opposed to any big street party at this point in time.''

University of Otago vice-chancellor Prof Harlene Hayne said the university would work with all those involved in the party to ''provide fun and safe events for students in the future''.

What form those events might take would not be known until a debriefing was held later this week.

The student responsible for attacking the St John vehicle would also face discipline under the university's Code of Student Conduct, she said.