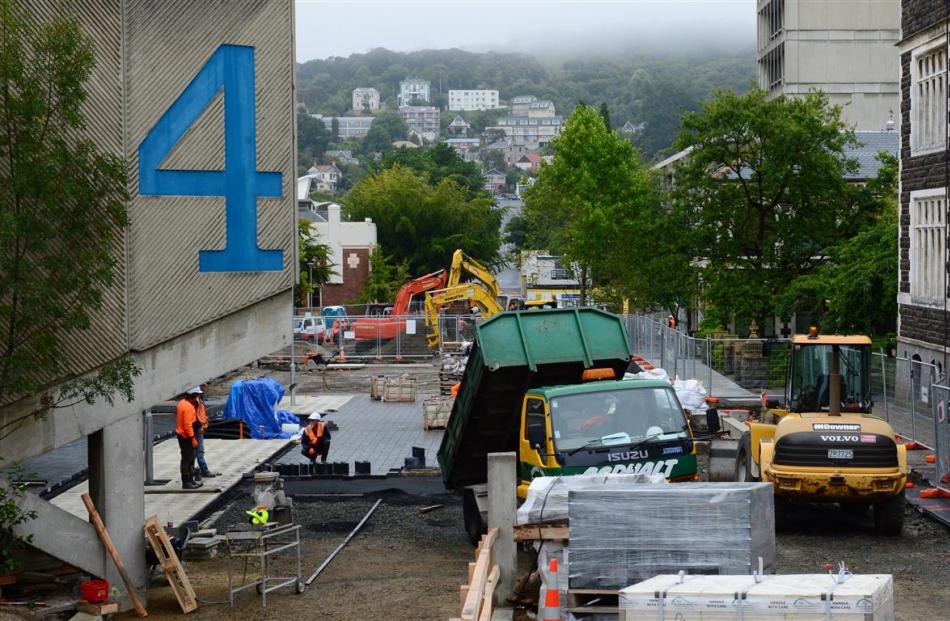 Contractors work on paving at the University of Otago. Photo by Gerard O'Brien.

The students might be away, but the University of Otago is a hive of activity as about 150 contractors work on construction projects.

Among them is the $126 million redevelopment of the Dental School in Great King St, with the university preparing to demolish the building's west wing.

A university spokesman said about 40 people were working on three sites for the Dental School redevelopment.

The work involved preparing for staff and services to move from the west wing of the Walsh Building (Dental School) before its demolition, which was expected to happen around March.

Contractors were also preparing a Southern District Health Board site that the services would shift to while a new building was constructed on the site of the west wing.

The DHB previously said it was renting the former Children's Pavilion at Dunedin Hospital to the University of Otago, in part for housing staff during the Dental School redevelopment.

The spokesman said the demolition of a smaller building on the Dental School site was already under way.

Work on the new clinical services building being erected in place of the west wing was expected to start mid-way through this year and be completed in early 2018.

The refurbishment of the main wing of the Walsh Building was expected to be complete in late 2019.

Between 40 and 50 contractors were working on the $56 million renovation of the University of Otago's chemistry building, which was being led by Christchurch company Leighs Construction.

Stage one was expected to be completed in March, with the overall project finished in early 2018.

The spokesman said the university was not in a rush to complete building work before students returned this year.

"We schedule our key delivery dates around academic calendars and agree with contractors prior to commencement.''