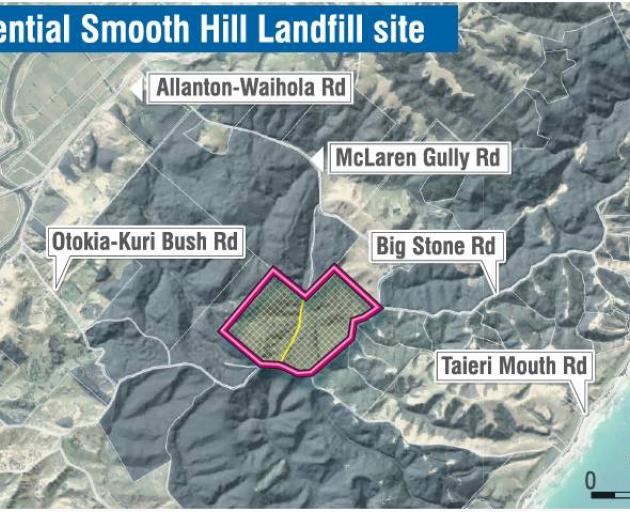 The Dunedin City Council is in the process of developing a new landfill at Smooth Hill in Big Stone Rd, Brighton. MAP: DUNEDIN CITY COUNCIL
The public will be heard on the proposal for a landfill near Brighton, the Otago Regional Council says.

The application was open for anyone to make a submission from today to November 15, he said.

Any decision on if or when a hearing would be held, and who might decide the outcome of the application, would follow the close of submissions, Mr Saunders said.

‘‘ORC determined that adverse effects from the associated activities warranted public notification, and the notification decision was made by an independent decision-maker,’’ he said.

The DCC upset some in the seaside community of Brighton when it went ahead with its decades-old plans for a landfill at Smooth Hill last year.

A petition to ‘‘stop the Brighton landfill’’ was signed by more than 2000 people.

Then, amid concerns about the effect on the environment, the DCC scaled back the size of its planned landfill.

Saddle Hill Community Board chairman Scott Weatherall said the community board had been asking for an open and transparent process throughout, and he thanked the ORC for allowing that process to happen.

He now hoped the Brighton community and the wider Dunedin community would make their views known, he said.

‘‘All should have an interest in this, because it is going to be the site where we dispose of our waste moving forward.

‘‘It’s just south of Brighton, but the reality is that the potential impact is far greater than that.’’

Big Stone Rd resident Sarah Ramsay, who would be an immediate neighbour of the proposed landfill, said the Brighton community had asked the DCC, before it put its application in, to request the application be publicly notified.

Mrs Ramsay said the community held its own public meetings last year because the city council ‘‘refused’’ to have such meetings.

The DCC appeared to believe it had already fulfilled its consultation obligations to the public in the early 1990s, when the site assessment for the landfill was done, she said.

But the community wanted a chance to speak about whether it wanted to drain wetlands to put the landfill in, or whether ‘‘digging another great big hole’’ met waste minimisation goals.

‘‘It is the Brighton community that stood up — and I think what we’re really concerned about is the potential for leachate to get into the Otokia stream, and ultimately it runs through Brighton, it runs past the school, it runs right out to Brighton Beach.

‘‘We are now in a statutory process which we will work through alongside our legal and technical experts, so cannot comment further, but we look forward to feedback through the submission process.’’