Summertime: when was the living this easy? 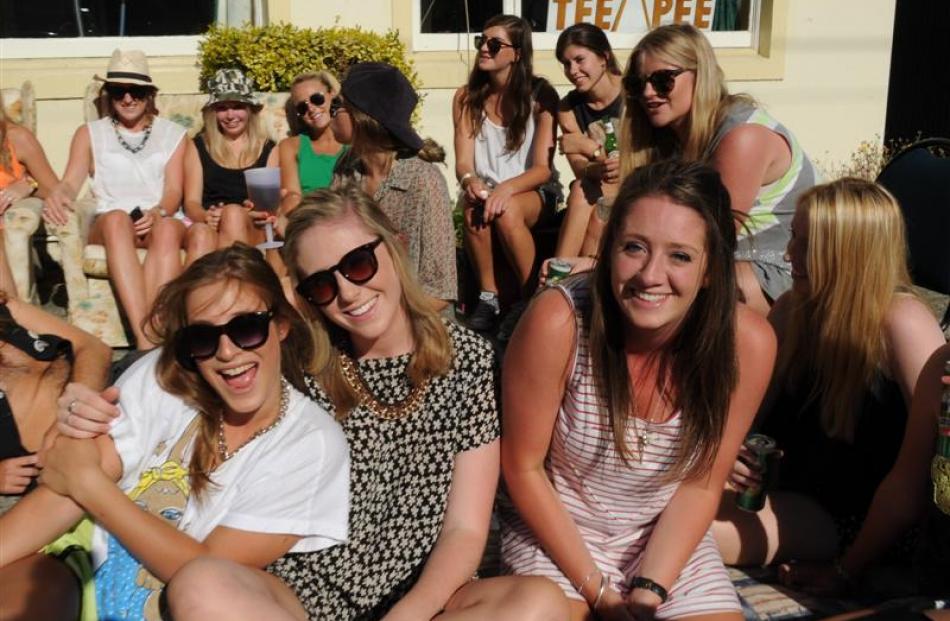 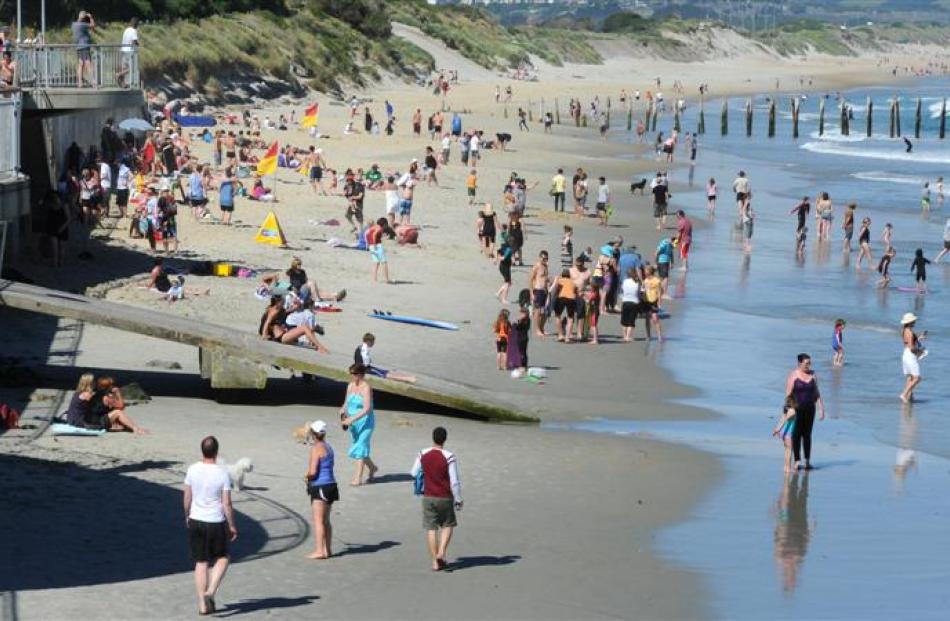 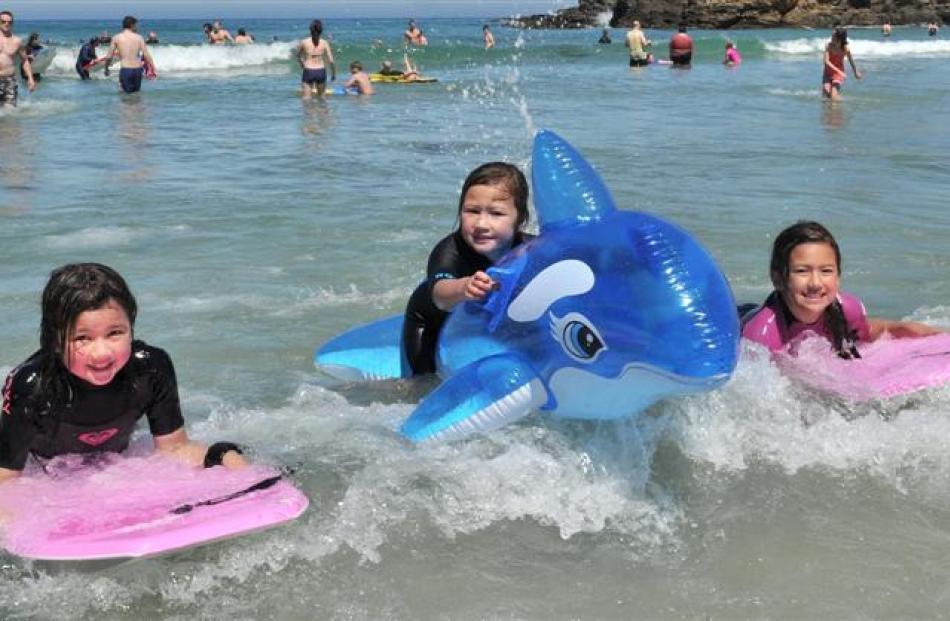 Enjoying the waves at Brighton Beach are sisters (from left) Nikita (7), Danielle (8) and Keala Hancock (9). Photo by Jane Dawber.

Many long-time Dunedin residents are scratching their heads trying to remember the last time the city experienced such a consistently good summer.

Long dry stretches of weather have been a major feature of this summer and could be set to continue into autumn.

It has been nearly three weeks since more than 5mm fell in the region and that rain broke a 15-day dry spell, about 20mm to 35mm falling around the region.

No significant rainfall was on the horizon for Otago, although a southwest change could bring some showers in the next few days, Meteorologist Ramon Oosterkamp said.

If that rain did not come to much, the region would be on the brink of a prohibited fire season, the rural fire service warned.

Because heavy rainfall in early January had filled lakes and rivers, Otago was only now starting to dry out, which meant urban and rural dwellers alike had been able to enjoy the summer.

John Bradley, of Dunedin, has been recording Balaclava weather statistics for nearly three decades and cannot remember the last summer that was as ''consistently good as this one''.

He believed summers such as this one were cyclical, coming about every 12 to 13 years.

His garden had been late in maturing, but he was harvesting good crops of tomatoes and runner beans, not to mention his best kiwifruit crop in 20 years.

''All this points to a good summer.''

Attendance at the pool was certainly weather-related and the lack of rain and wind had translated into high visitor numbers, she said. Dunedin's consumption of water had gone up, peak daily peak demand this summer being 51,400cu m a day compared with 49,400cu m last summer.

Surf Life Saving Otago spokeswoman Steph Laughton said it had been a great summer on Otago beaches, weekends especially being much more popular than normal.

Fish and Game Otago said it had been a superb summer for fishing, although rivers were getting quite low and weedy and fish harder to catch.

It had been the best cicada hatching for many years, which was another indication of a warm summer, Fish and Game said.

''As a consequence the fish have been hard to catch because they're so full - it's a cruel irony.''

As demand for irrigation increased in Central Otago some smaller tributaries were starting to dry up and Fish and Game was translocating some fish from dry beds to reservoirs.

Federated Farmers Otago president Stephen Korteweg said Otago had been more fortunate than other provinces, but if it did not rain in the next two to three weeks it would get more ''challenging''.

''If it stays dry for another month it will be very difficult for everybody.''

As the dry period had come late in the summer and during what was expected to be dryer month for the region, farmers, like others, had received the benefits of the dry weather.

''It has been very pleasant. We don't usually get so many high 20degC days in a row.''

Some farmers were already supplementary feeding and offloading unnecessary stock and dairy herds were going on to 16-hour milking.

Rural fire officer Graeme Still said February had been one of the driest in a long time and had left the service on ''tenterhooks''.

''If this southerly doesn't produce the amount of rain we need, we'll be seriously looking at prohibitive fire season.''

The area most at risk was the north coast from Pine Hill to Waikouaiti followed by the Strath-Taieri, but any north-facing area was pretty dry, he said.

A sign of the good summer was that trigger levels, which usually rose three points in a day, were rising 8 to 10 points. Crossover spikes of humidity and high temperatures normally occurred only once a week, but happened five times this week, Mr Still said.

''The only saving grace is that we've had little or no wind.''

Anyone who had a permit to light a fire should use common sense and not light anything until there had been some rain, he said.

Niwa climate scientist Georgina Griffiths said the standout feature of this summer was the slow-moving anticyclones, which brought dry, sunny weather to most of the country. Balclutha and Cromwell recorded their highest summer sunshine hours since records began at 855 and 747 respectively, and Dunedin recorded its fifth-highest summer sunshine hours, 612, since 1948.

''For much of the country and Otago you've had 20% or more sun over a sustained period of fine weather.''

Temperatures were warmer across the region, mean temperatures ranging from 17.3degC in Wanaka to 15.2degC at Dunedin airport, which was between .4degC and .7degC higher than normal.

Soil moisture had also dropped to extreme levels in Central Otago and to significantly low levels in coastal Otago. Summer rainfall in Otago was near normal because of the heavy rainfall in December and January but February was very dry, most towns in Otago experiencing half their normal rainfall. For the month, Oamaru recorded 18mm, which was 50% of normal, Wanaka 16mm (31%), Dunedin 31mm (41%) and Queenstown 47mm (97%).

At a glance
OTAGO SUMMER WEATHER
• Temperatures between .4degC and .7degC above normal
• Rainfall about normal
• Very sunny