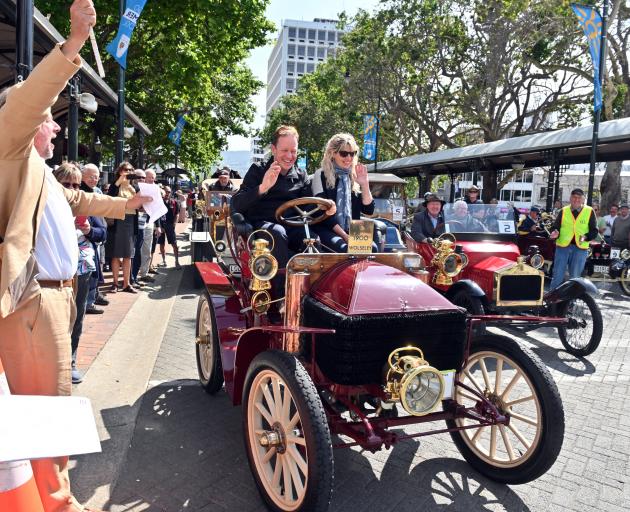 Race starter Dunedin city councillor Lee Vandervis (left) waves away the first veteran car, a 1900 Wolseley driven by Gary Winter and his wife Sarah, on the Dunedin to Brighton Veteran Car Rally on Saturday. PHOTOS: LINDA ROBERTSON
Plenty of sunbeams were shining when the 66th annual Dunedin to Brighton Veteran Car Rally began at the Octagon at the weekend.

At the Saturday 11am departure most of the sunbeams were coming, as usual, from the sky.

However, three other Sunbeams, of the also brightly coloured but four-wheeled variety, were provided by Colin and Joan Pearce.

The couple, who once farmed in South Otago and have since retired to Mosgiel, own three Sunbeam veteran cars that were driven at the rally: the red 1914 two-door car they were travelling in, as well as a green 1911 model and a blue 1912 car, driven by others.

"We get a lot of enjoyment really — they’re good to drive," Mr Pearce said of the many times his wife and he had taken part in the car rally. 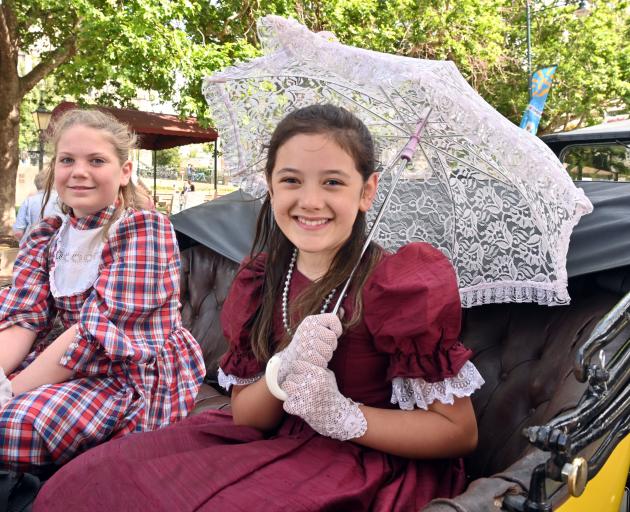 Jenifer Gough (11, left) and her friend Kiani Heperi (10), both of Mosgiel, ride in a 1914 Buick owned by Jenifer's father Nevin.
At the rally they liked "meeting up with our car club friends — we don’t see some of them for months".

"It’s always interesting to see the new restorations," he said.

The Pearces said they enjoyed driving in their two-seater — without side windows — and, as former farmers, they liked being out in the fresh breeze and able to smell the countryside and the passing fields.

Travelling at slower speeds — about 70kmh — they saw and heard more than people rushing past more quickly in modern, fully enclosed cars, they said.

The latest rally also offered plenty of other bright points for organisers, including the 40 vehicles — the largest turnout for at least five years, and well up on last year’s 30.

Adding to the many bright colours of the participating vehicles was a red starter’s flag flourished with theatrical enthusiasm by Dunedin city councillor and race starter Lee Vandervis. 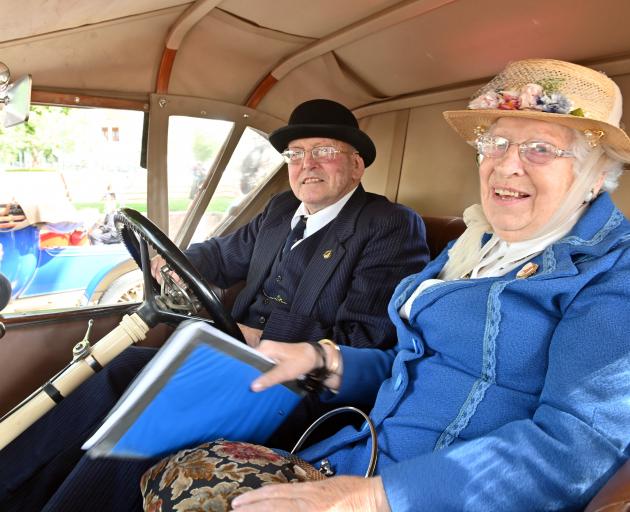 Colin (86) and Joan (83) Pearce, of Mosgiel, in their 1914 Sunbeam.
A lively commentary on the departing vehicles was provided by Dunedin personality former national television news reader Dougal Stevenson.

In his address, Cr Vandervis said this was an occasion to "celebrate our brilliant vintage fossil-fuelled heritage", and added later that he drove an electric car.

"It was the best for years," Boyd Wilkinson, who co-ordinated the rally for more than 10 years until the early 1990s, said of the send-off event.

The rally is loosely modelled on the London to Brighton vintage car rally.

Several veteran motorcycles and at least one veteran van were among the participating vehicles.