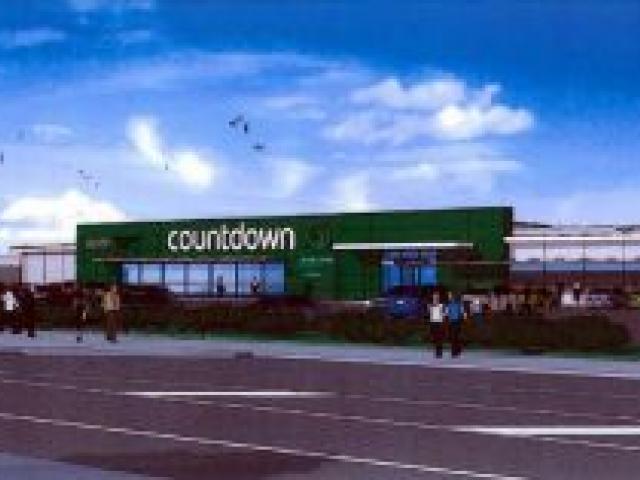 An artist's impression of the proposed new Countdown supermarket to be built in Gordon Rd, Mosgiel, for Progressive Enterprises Ltd. Image supplied.

The fate of a $15 million Countdown supermarket proposed for Mosgiel is set to be decided at a hearing, which begins today.

The proposal for a new Countdown in Gordon Rd, which was predicted to create 48 jobs, caused concern among Mosgiel residents, but the company made changes to its plan in an attempt to address them.

Despite those changes, council planner Amy Young is still recommending resource consent be declined, saying in a report the application lacked sufficient detail.

''I believe that there are many gaps in the information provided to fully ascertain the proposed effects of the supermarket,'' she said in her updated report.

Countdown had offered to reduce the proposed hours of operation from between 7am and 10pm daily to between 8am and 9pm, but Ms Young did not believe the offer went far enough.

''I would recommend that if the committee was of a mind to grant [consent], that opening hours between 9am and 6pm would be more suitable in the existing residential environment.''

Phil Lee, who owns a flat looking on to the proposed site and submitted against the original proposal, said he remained opposed to Countdown's plan.

He was worried about the effect lights in the car park, the extra traffic and the noise would have on what was a residential area, Mr Lee said.

''It's just in the wrong spot. They are going to make a quiet piece of Mosgiel quite busy.''

His message to Countdown was: ''Build it somewhere else in Mosgiel.''

Ms Young's planning report is one piece of evidence to be considered by Crs Andrew Noone, David Benson-Pope and Kate Wilson at the hearing being held at the Salvation Army Hall.

The councillors could choose to go against her advice.