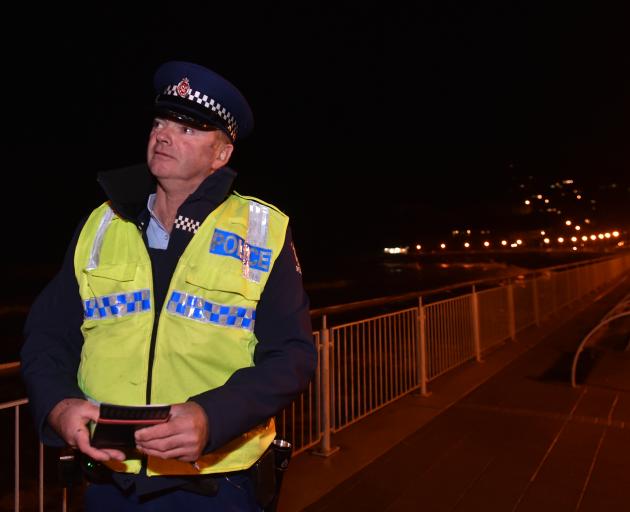 Graham Perkins at St Clair last night. Photo: Peter McIntosh
A surfer who reportedly disappeared from view as night fell at St Clair Beach sparked a police callout yesterday evening, but he turned up safe and well shortly after.

Acting Sergeant Graham Perkins, of Dunedin Central Police Station, said people who had been watching the man surf at St Clair at sunset called police when they lost sight of him and did not see him return to shore.

Police descended on the Esplanade but about 6.30pm the man approached Sgt Perkins to assure him he was safe and sound, to the visible relief of the long-serving officer.

"He just approached me and made himself known, which was a bloody good result.

"So we stood down all the bells and whistles and other resources."

Swells of more than 4m, southwesterly winds and a high tide at 4pm meant the heaving waters were still lapping at the sea wall when the surfer turned up.

Very glad about the safe return. A couple of us saw something about 300m out at sea but it was very difficult to know if what I/we saw was a surfer or a seal. The sea was raging, it was dark at around 6pm. It seemed impossible that it could be someone that far out and going further out at the time. We then lost sight. The lesson here for us was, though, even if in doubt, call police to describe the situation and let them make the call to alert rescue if needed.