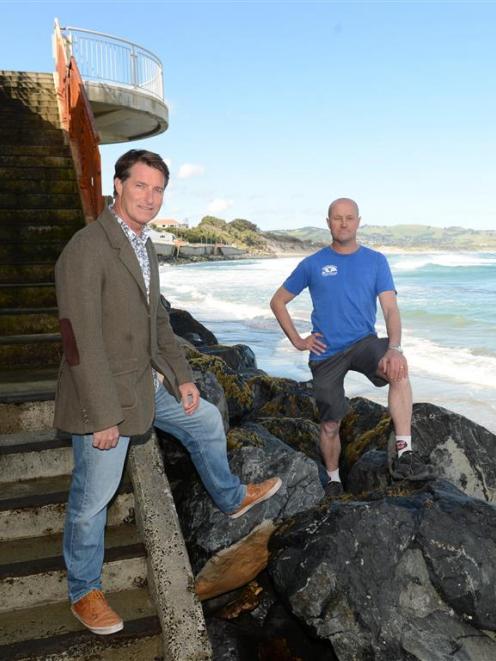 Sand loss, coupled with the boulder wall protecting the St Clair sea wall's footings, have made access at anything other than low tide so dangerous several surfers have been injured and their boards damaged or ruined.

In response, a collection of surfers, surf life-savers, residents and local business owners has rallied together to form the St Clair Action Group to advocate for improvements.

In a letter to Dunedin City Council staff, the group outlined its two major concerns: the short-term issue of unsafe beach access, and the longer-term issue of diminishing sand at the beach.

‘‘Quite regularly, boards and bodies are breaking and we need to do something about it. So, we are.''

For surfers, the reduced sand had caused the biggest problems. It meant surfers were having to effectively climb a 2m-high boulder wall with their boards while being buffeted by the beach's heavy swells.

‘‘From mid to high tide, getting out of the surf is hazardous. We have numerous stories from local surfers, including an experienced 14-year-old female surfer who got stuck in the rocks coming in, hurt her leg, and her board was damaged to the extent that it was not worth fixing.''

Already the group had forged a working relationship with the council. A proposal to remove rocks from the bottom of the access stairwells to allow safe passage from steps to sea had immediately been actioned by council staff, Dr Egan said.

The council had also sandblasted the steps to improve grip - the group's other short-term request.

The group's medium-term goal was a bigger project: replacing the beach's access ramp, destroyed in May, with a new ramp near the entrance of the salt water pool.

The nature of the beach's swells meant that area experienced calmer seas than the ramp's last location, making it a safer and longer lasting prospect, he said.

While Dr Egan accepted a new ramp would cost money, the safety of the beach's users meant it was necessary.

‘‘So let's make it safe. They spend a whole lot of money on rugby grounds and soccer grounds, but surfing is one of the most popular sports. So, let's spend a bit of money on this.''

Council parks, recreation and aquatics group manager Richard Saunders said that suggestion had been received and noted by council staff.

The council would ‘‘consider that as an option'' but it was too early to say whether it would be adopted.

Mr Saunders said the council appreciated the feedback from the group, and would continue to work with it.

Dr Egan said the group's long-term goal was to see a solution for the disappearing sand, although there were no obvious immediate solutions.

All the available expertise and literature on the subject needed to be collated, all relevant parties needed to have their needs discussed and, with that information, the city could move towards whatever the best solution would be, he said.

Analysis by the council's contracted coastal engineering firm, Tonkin and Taylor, determined the installation of more sand sausages, as well as the repair of the damaged ones, would adequately protect the dunes in the medium term while longer term solutions were investigated.

Preliminary designs were expected to be ready for public consultation ‘‘early in the new year'', he said.

The sand sausage installations were expected to be completed before the end of summer.