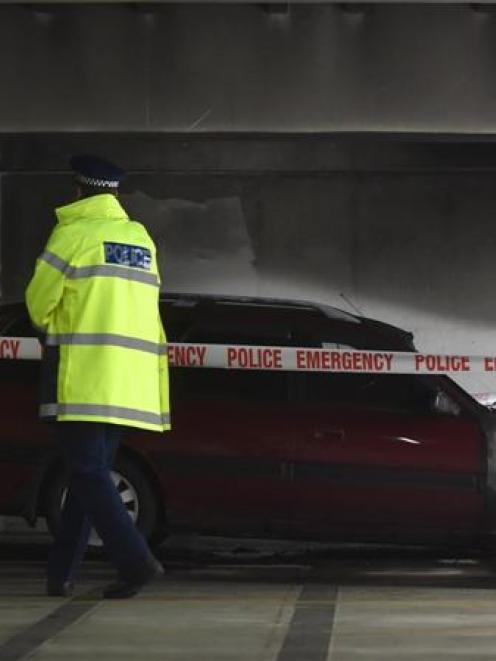 A police officer at the scene of Saturday's car fire at Wilson Park building in Moray Pl. Photo by Peter McIntosh.
Police are treating as suspicious two car fires in Dunedin, one in a central car parking building that caused a pall of acrid smoke to drift over the city early on Saturday.

Senior Sergeant Brian Benn said the first fire, near the Leviathan Hotel, in Cumberland St, was called in at 5.23am.

It caused minor damage to the front bumper of a Ford Focus.

The second was at the Wilson Parking building in Moray Pl, on the Octagon level of the building.

The Fire Service sent four appliances from the Dunedin station following a call at 6.32am.

A Mazda Capella was damaged in the incident, and the area around the vehicle blackened.

Part of Moray Pl was closed off while firefighters fought the fire and extracted smoke from the building.

Snr Sgt Benn said the CIB was investigating the fires. He could not confirm the two were linked, nor whether they had been lit on purpose, but said, ''We don't believe in spontaneous combustion.''

Fire Communications Centre shift manager Andrew Norris said all levels of the building were filled with smoke, and three fans were used to clear them.

The police had been in touch with a fire investigator.

He said there were no reports of serious damage to the building.

One person was taken to Dunedin Hospital with smoke inhalation after a fire in Fairfield early on Saturday. Mr Norris said firefighters received a call from a person some distance away from the fire at 1.33am, and took time to find it.

When they did, they found a fence fire, which also damaged the conservatory of a house in Estuary Cres.

The fire was extinguished, and a patient taken to hospital with moderate to minor smoke inhalation.