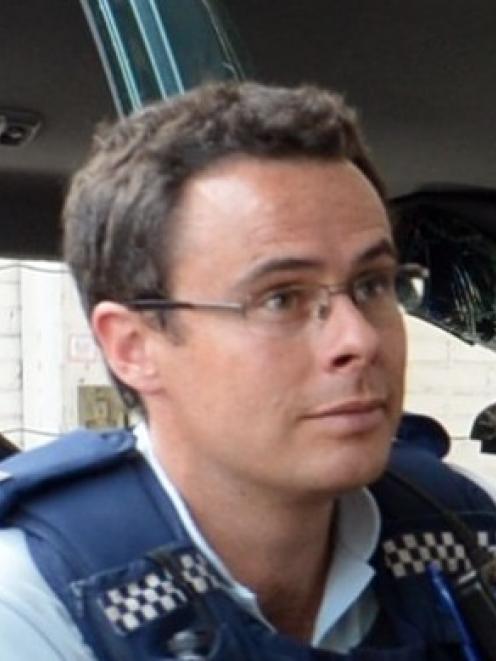 Acting Senior Sergeant Anthony Bond. PHOTO: ODT FILES
The driver of a vehicle that crashed into a bush while trying to flee police in Dunedin on Tuesday is the same man who was reported knocking on doors and telling people he was "fundraising", police say.

A 29-year-old man will face court on a string of charges following the pursuit, but no offence was determined in relation to the door-knocking.

Acting Senior Sergeant Anthony Bond said police identified a vehicle of interest at noon and attempted to stop it in King Edward St, near Wilkie Rd.

"The vehicle initially stopped but then took off — police followed and a pursuit was initiated."

The vehicle travelled through the Pak’nSave and Warehouse car park, into Hillside Rd and eventually Andersons Bay Rd where it allegedly "clipped" another vehicle, he said.

It then continued on to State Highway1 heading south "at speed".

The driver attempted to turn into Burnett St but failed, hitting a light post and crashing into the bushes.

The driver, who was not wearing his seatbelt, was taken to Dunedin Hospital as a precaution.

Snr Sgt Bond confirmed the driver was the same man with a swastika facial tattoo who was knocking on doors in St Clair and other suburbs on Monday night.

"Police have investigated the matter and determined there is no offence, but encourage the public to only give money to recognised charities, and not random members of the public who knock on doors as it only encourages them to return," he said.