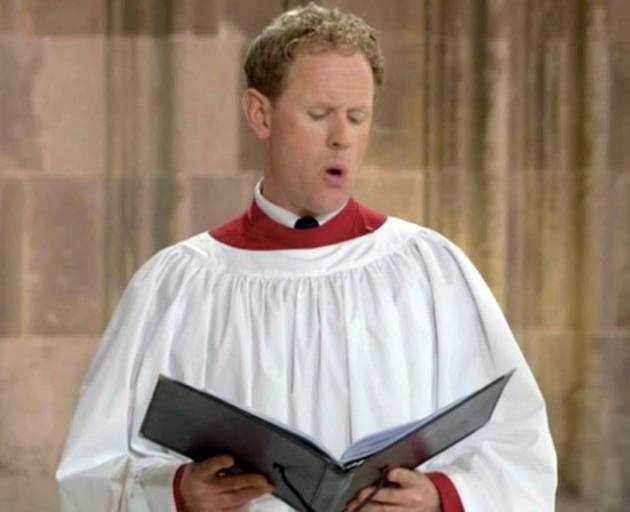 Former Dunedin tenor Nick Madden performs at the funeral of Prince Philip at St George’s Chapel on Saturday. PHOTO: TWITTER
As viewers around the globe tuned in for the funeral of the Duke of Edinburgh, one Otago couple was more nervous than most.

Robyn and Richard Madden’s son, Nick, was one of three lay clerks of the St George’s Chapel Choir to perform hymns at the Windsor service on Saturday.

Nick, who grew up in Dunedin and began his singing career in the St Paul’s Cathedral choir, is a member of the Queen's Six, a classical music group established in 2008.

He and his sister, Clara Loughran, are no strangers to royalty.

Nick sang at the wedding of Prince Harry and Meghan Markle in 2018, and recently performed at a private service for the Queen on Easter Sunday.

And Mrs Loughran, who now works on a freelance basis for the Duke and Duchess of Sussex’s charity projects, has worked for the Royal Family for several years.

Their parents have never really got used to their children’s proximity to the Crown.

"They accept that they’re in a privileged position, they love what they do, and if there’s something that needs to be done, like good Kiwis they get on and do it."

The proud parents stayed up into the wee hours to watch the service live.

"But he’s just great, he loves it," Mr Madden said.

Their son initially told them that he would be performing early last week.

"We had phone calls during the week, they had pretty intensive two five-hour rehearsals on Thursday and Friday."

He was feeling a little nervous ahead of the performance, but rose to the occasion.

"When you’re singing for a potential audience of a million people, you have to have nerves of steel.

"He’s great like that, he just gets up and does it."

Nick was one of two Kiwis to take part in the funeral.