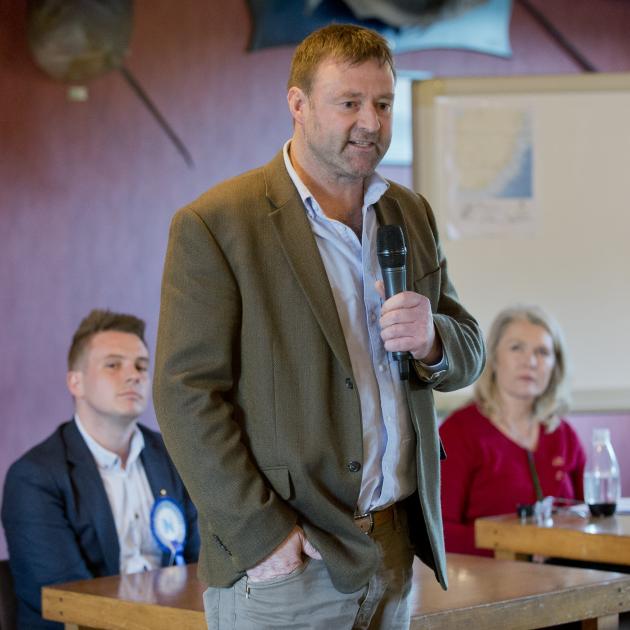 Tautuku Fishing Club members met the Taieri candidates during an election forum at the club in Dunedin yesterday and told them they felt their voices were not being heard.

The proposed network includes six marine reserves, where marine life would be fully protected and fishing banned, five marine protected areas, which would be subject to a range of restrictions on fishing, and one kelp protection area, where commercial harvest of bladder kelp would be prohibited.

The two-month consultation process, originally due to end on April 17, was extended from June 3 to August 3.

Club president Brett Bensemann said it was not enough time to make an informed decision.

He wanted the Taieri and Dunedin area to "rattle a few cages" and encouraged those at the meeting to write submissions to the Government.

Mr Kernaghan said he agreed the consultation needed to slow down and promised to work more closely with recreational fishers to ensure they were consulted "properly".

He believed the proposed reserves would not address the issue of long-term supply, and more people would go to small fishing spots across the coast, creating an "oversupply" of people in one area.

Ms Leary commended the club’s "responsible" view in recognising 80% of the country’s biodiversity was in marine areas.

She was concerned about recreational and commercial fishing being "lumped" together and said there needed to be a six- month period to gather more data.

"On reading some of the documentation, to me, it looks like there have been some big assumptions that have been made."

Mr Patterson said he had a "doubting Thomas" view on the marine reserve issue. While the proposal sounded good to people in urban areas, there were "huge" commercial issues", he said.

"NZ First have a huge degree of sympathy for the point you are making."

Mr Bensemann asked whether Ms Leary and Mr Patterson would go back to their ministers to pass on the views they had expressed in the meeting, to which both Mr Patterson and Ms Leary agreed.