A wreath lies amid the vines at Taieri Mouth yesterday as the community mourns a young girl killed in a boating accident at the bar on Saturday. Photos: Peter McIntosh.
A camera which aims to show boaties a safe passage over the Taieri Mouth bar has been installed but not yet activated, leaving some to question whether it could have saved a toddler who died in a boating accident at the weekend.

A small boat was carrying a family of five when it was flipped by a wave while attempting to cross the bar on Saturday afternoon.

A young girl died at Dunedin Hospital and another child remains in the intensive care unit in a stable condition.

The camera is being organised by the Dunedin Marine Search and Rescue group and co-ordinated by Jules Radich, who believed it could have made a difference to the situation if the family had had the opportunity to look at it.

Mr Radich confirmed the camera had been installed on the roof of a house overlooking the bar at Taieri Mouth, but it was not yet operating. 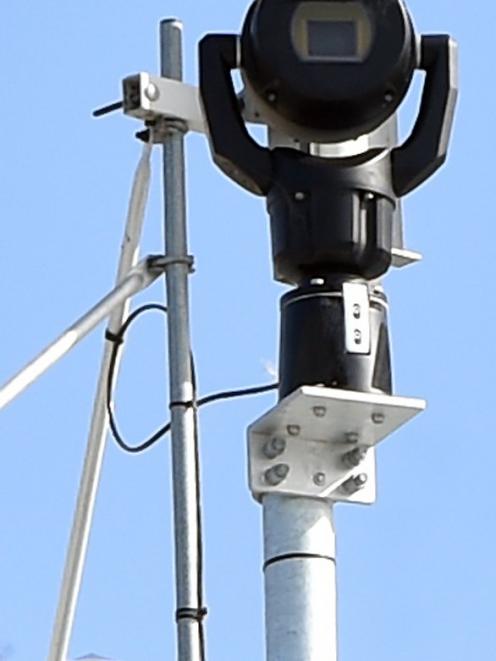 A new high-quality camera sits on the roof of a house overlooking Taieri Mouth. When it is activated later this month, it is hoped it will help guide boaties safely over the bar.
He hoped it would be turned on later this month when its associated website was completed.

"The critical thing that is needed before it goes live to the public is a suitable website to host it.

"There’s still quite a lot of work to be done on building the website," he said.

"The point of the camera is that someone who is going to go out of Taieri Mouth can go back and see what the bar has been doing over the last few cycles — it moves all the time.

"You’ll be able to see where the channel is.

"The website also needs to have information to inform people of the dangers and what to look for," Mr Radich said.

He said the website would be well known and the URL would be signposted at the launching ramp.

However, others were not convinced the camera or the website would have changed anything that happened in Saturday’s incident.

Resident Trevor Griffin was not involved in Saturday’s rescue, but believed it was similar to many others he had been involved in at the mouth over the years.

He did not believe the camera would have helped prevent the catastrophe because without education about the intricacies of the mouth, many boaties would not be able to understand or identify the dangers that the camera was showing, he said.

"It all changes every set of waves.

"If you watch a good commercial fisherman, they’ll sit there sometimes for up to an hour and wait for a gap. That’s realistic," Mr Griffin said.

"The camera will only be any good if you know what you’re looking at.

"And that’s assuming people even bother to look at the camera feed."

He still believed the best solution was for boaties to attend bar-crossing seminars.

"By itself, the camera would not have been the cure or be-all to everything that happened on Saturday, but it would be an important part to education about the bar.

"That’s where Trevor Griffin and I agree. The availability of the camera is one thing, but what are you actually looking for? What are the key elements?"

He believed there needed to be an education programme run in conjunction with the activation of the camera.

Mr Radich said the project was part of a three-stage programme.

The first stage was to install the camera and launch the website.

Stage two was to move the camera to a higher vantage point with a better view — ideally a large pole on public land.

"That will take some time; it’s quite a convoluted process."

Stage three would be to install a second camera with a view from a different vantage point.