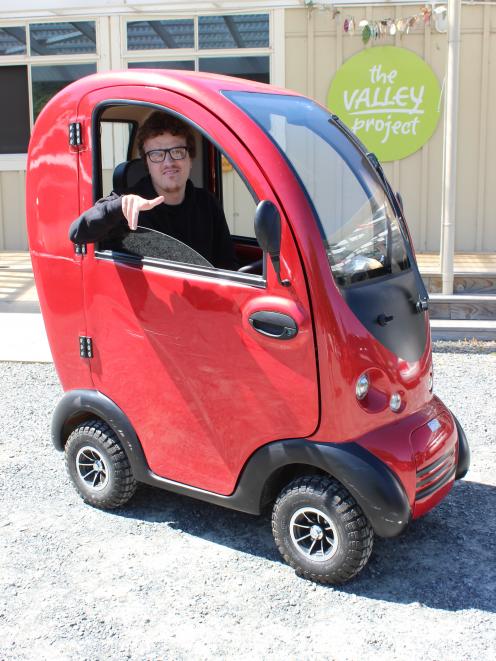 Nothing stops Rorie White from chasing his goals and now with his new motor scooter, named Ruby, he is even more mobile.

Mr White, who has cerebral palsy, works at the Valley Project as a receptionist four days a week and is also working on a project to improve accessibility in Northeast Valley.

Mr White (24) got his new motor scooter last month and can now ride to work warm and dry, visit friends and run errands.

The motor scooter had made a huge difference in his life. He was now "much more independent'', he said.

It is fully enclosed, equipped with all the things he needs - a radio, heater and a reversing camera.

Mr White said Ruby goes about 15kmh and was super-easy to run, needing only to be plugged into a power socket at home for charging.

As a scooter has been Mr White's only mode of transport, he often used to get cold and wet driving to work or had to rely on other people to pick him up.

Mr White grew up in Owaka before moving to Dunedin to study. He got his job at the Valley Project in June this year and loves his work.

"I couldn't ask for a better group of people to work with. Words can't even describe how cool my job is,'' he said.

Along with being a receptionist, he is also busy working on his project.

Mr White wants to help improve the safety of footpaths and road crossings in Northeast Valley because he thinks in some places they "just aren't good enough''.

A $10,000 Lottery Grants Board grant allowed Mr White to purchase his new scooter, for which he said he was very grateful.