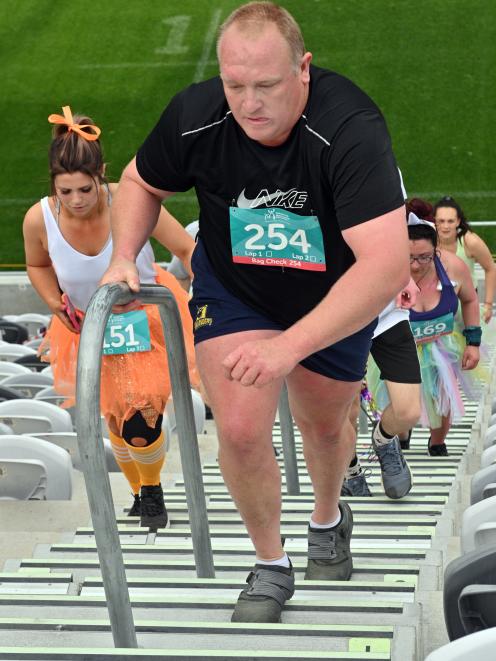 James Crutchley takes part in the My Step Up Challenge at Forsyth Barr Stadium in Dunedin yesterday. PHOTO: LINDA ROBERTSON
Reasons for being there varied, but the 155 people who went up and down the stairs at Dunedin’s Forsyth Barr Stadium yesterday were united in stepping up for the cause.

They raised more than $50,000 for Leukaemia and Blood Cancer New Zealand.

Jenny Newstead, a multiple gold medallist in the pool at the 1992 and 1996 Paralympics, has muscular dystrophy but did not hold back.

She was challenged to take part by her friend Hahna Briggs, who had not realised Ms Newstead had a personal connection with the cause. Her brother-in-law had a successful bone marrow transplant almost 12 years ago.

Ms Briggs was also returning serve after Ms Newstead challenged her to compete in a hill run at the Masters Games.

The pair represented the Gasp! Dance Trust, which promotes inclusive dance for people with or without disabilities.

Blake Kennedy entered the event in honour of his grandfather, Nelson Kennedy, who had myelofibrosis before he died.

Jayden Haggerty took part both for the fundraising and the fitness.

Last year, the Dunedin firefighter completed the course in his firefighting gear.

He had a more comfortable experience this year.

Patrick Copson, Tarsha Norris and Rebecca Jones formed the team 2B To Be and the entry was notable for its colourful attire.

Ms Jones said she bought the fabric for the eye-catching tops during the lockdown.

"We thought we better be bold and bright."