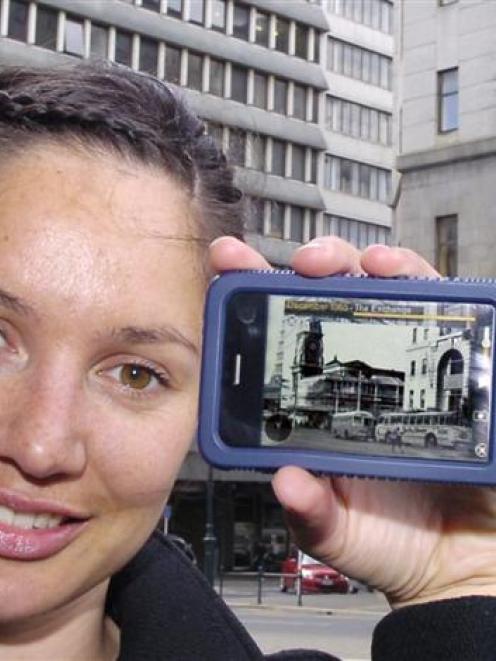 Dunedin augmented reality industry project leader Renee Lee with the smartphone application she is helping develop, and (inset) an example of what the application will look like, showing a historical image of the Exchange over the modern-day version. Photo by Jane Dawber.
A new smartphone application that will give tourists and Dunedin residents a direct view into the past is one of three technology-based business initiatives to get almost $300,000 from the Dunedin City Council.

The Dunedin augmented reality industry project will allow people to use the camera on their phone to view Dunedin scenes, then overlay that with historic views showing, for instance, the old stock exchange building, cable cars on High St or videos showing the construction of newer facilities like the Forsyth Barr Stadium.

As part of the collaborative effort, WIC will provide wireless hotspots across Dunedin to deliver the media to cellphones.

DVML was supporting the project rather than receiving money from the fund, and it was hoped videos of construction of the stadium would be offered as part of the application.

Economic development committee chairman Cr John Bezett officiated at a presentation of $288,500 to the three projects, together worth $470,400.

Use would initially, at least, be restricted to the area close to the central business district, including Princes St, the Exchange and the railway station.

Ms Lee said augmented reality was a growth market, and the project could be developed in Dunedin and go worldwide.

"This can raise the public perception of Dunedin as a city at the forefront of technology."

She planned to have the application up and running in Dunedin by February next year.

WIC chief technical officer Stu Fleming said he had deployed 40 wireless internet "hotspots" in the city, and had plans for another 70.

They would be used to provide internet service for the application.

Tracmap, AbacusBio Ltd and AgResearch got $50,000 towards a $75,000 project to provide software that allowed farmers to better capture information on farm activities.

Farmers still used a pencil and paper to record their activities, project leader Colin Brown said, and the new software would allow them to, for instance, validate the safe farming practices consumers demanded nowadays.

Siliconcoach chief executive Joe Morrison said the platform would help coaches at any level, and included video capabilities that would allow mentors to "pull to pieces" the techniques of athletes, and help coaches develop their skills.

"It will establish Dunedin as the hub for national coach-development solutions, with the potential for that to grow to service the international market."

Cr Bezett said the fund was put together in part as a response to the recession, as a way to help business in the city.

He reminded the businesses it was ratepayers' money.

"It's up to you guys to make sure ratepayers' money isn't wasted."