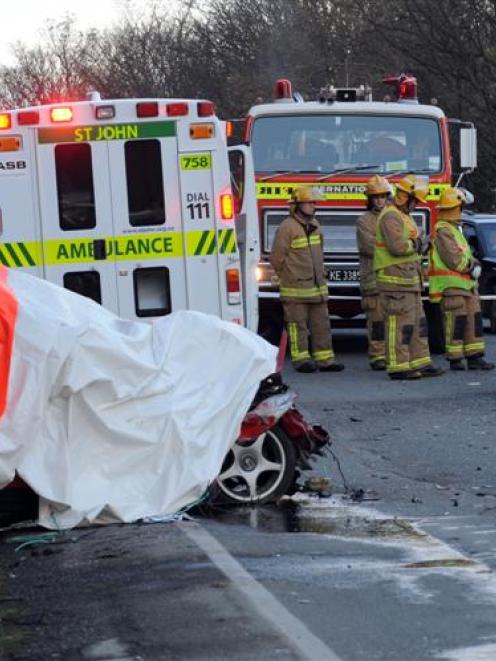 He was Liam Christopher Stevenson (16).

State Highway 88 was closed for more than five hours after the teenager's late-model saloon and the container truck collided about 3.55pm.

The truck, heading towards Dunedin, was carrying an empty container and was shunted down a bank by the impact.

"It looked like the car had slipped over the centre line, when he hit the truck. There was a massive collision right away and the truck went down the bank," witness Jodie Gilmore, of Aramoana, said. 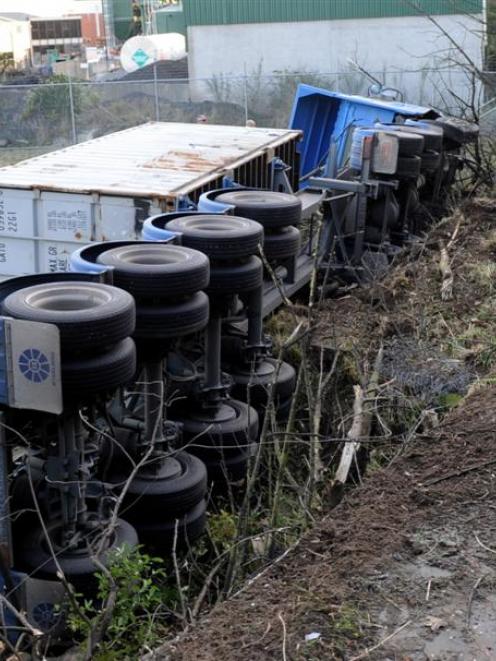 The truck involved in the crash lies in a ditch. Photo by Stephen Jaquiery.
"We ran over to help, but there was nothing we could do. He was obviously dead," she said.

"The truck driver had a few bumps and bruises, but was OK. It's unbelievable. I'm still in shock."

The crash was attended by three units from the Ravensbourne and Dunedin Central fire stations.

Hundreds of motorists were affected by the closure of the road between Dunedin and Port Chalmers. A detour was available via Upper Junction and North Rds.

Serious crash unit investigators remained at the scene, he said.

Police were unable to release the dead teenager's name, because he had yet to be formally identified.

Further disruptions were expected on SH88 this morning.

Traffic was likely to be reduced to one lane as towing operators removed the crashed truck, Snr Sgt Benn said.

Another minor crash in Upper Junction Rd at 6.45pm disrupted traffic on the detour for about an hour, after a truck slid off the road into a ditch.

In another fatal accident yesterday, an elderly man died after a car he was in left the road and ended upside down in a stream in rural Southland. The crash happened about 4.45pm on the Mataura Island-Fortrose Rd, south of Edendale.