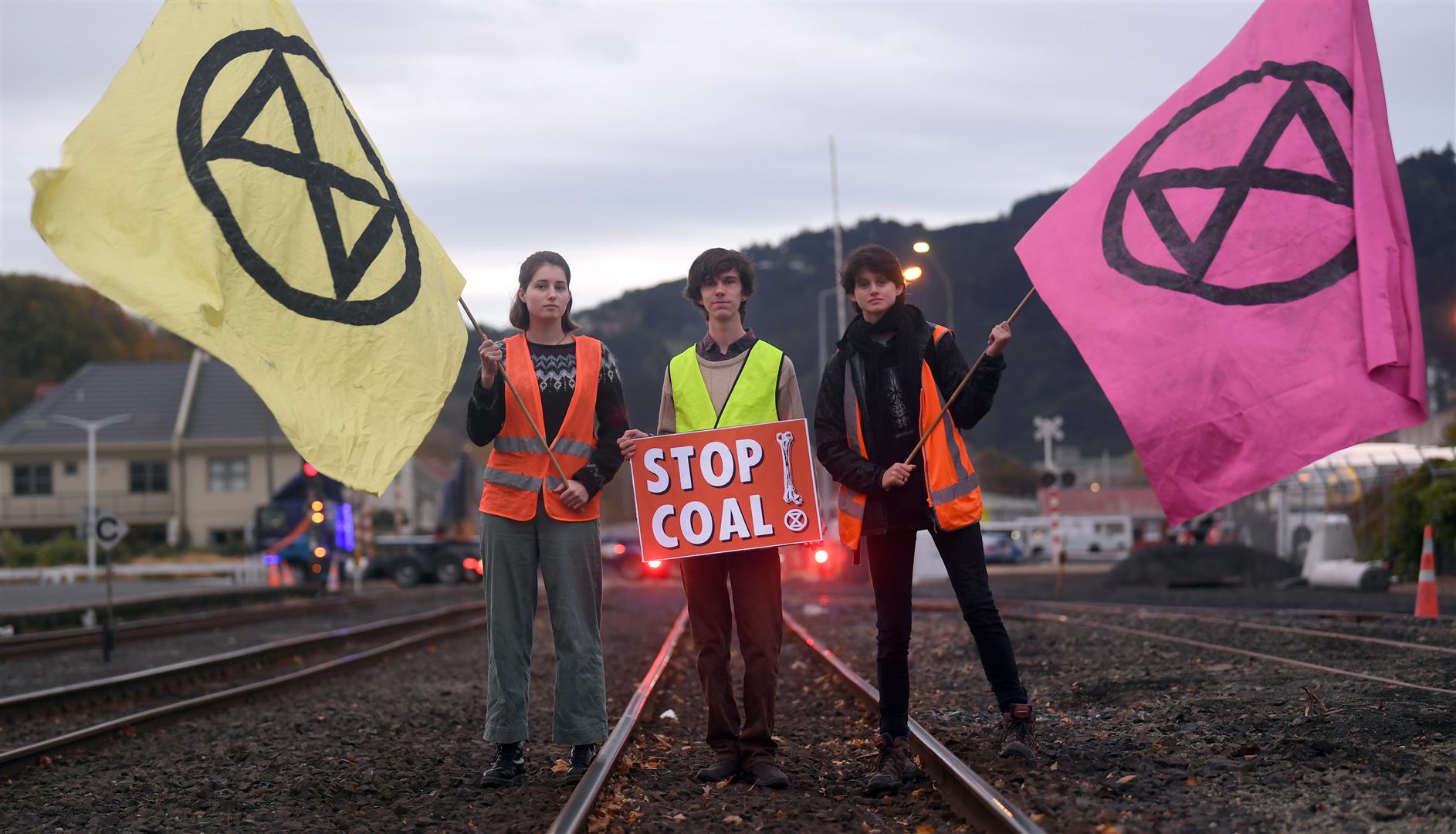 Protesters opposing the use and transport of coal block the railway tracks near the Dunedin Railway Station this morning. Photo: Stephen Jaquiery
A train driver stopped by climate activists this morning did not see three youths on the tracks until the train was ‘‘dangerously’’ close, police say.

Three young activists stepped on to the rail track about 7.20am.

Senior Sergeant Craig Dinnissen said, this time, the train drivers reported that they had not seen the activists until the train was at a dangerously close distance.

‘‘Climate change activists are again putting people at risk, this time putting 16-year-old youths on the track in hours of darkness.

‘‘Once [the train] starts moving, they can’t actually just stop.

‘‘The protesters are endangering their lives, and the activists that are standing on the platform are encouraging them to endanger their lives as well.’’

Extinction Rebellion spokesperson Dante Dawes said they were there to demand that KiwiRail stop hauling coal.

‘‘The carbon dioxide emissions from this one daily shipment are the equivalent of putting an extra 80,000 cars on the road every day, more than enough to negate any promises KiwiRail has made to cut their own operating emissions.

‘‘It is unacceptable that KiwiRail, a state-owned enterprise, be so complicit in the climate crisis and the destruction of our future.

‘‘We feel solidarity with other young people all across the world who are fighting . . . That is why we have been an important part of the three previous actions on these tracks, and why we are prepared to do it again.’’

They said the group had tried to engage in discussion with KiwiRail and written letters to its shareholding ministers, but felt their calls for action were not being answered.

A police spokeswoman said they were called to the protest at the Dunedin Railway Station at 7.45am.

About 10 protesters were in attendance, and at one point three of those people were on the train tracks.

‘‘After speaking with police the three people removed themselves from the tracks.’’

No arrests were made and police had not issued any trespass notices ‘‘at this time’’, she said.

The Otago Daily Times has contacted KiwiRail for comment.

The melting of the world’s glaciers has nearly doubled in speed over the past 20 years a new report reveals. Scientists say human-driven global heating is behind the accelerating loss. “A doubling of the thinning rates in 20 years for glaciers outside Greenland and Antarctica tells us we need to change the way we live. We need to act now,” the lead author said. “It can be difficult to get the public to understand why glaciers are important because they seem so remote, but they affect many things in the global water cycle including regional hydrology, and by changing too rapidly, can lead to the alteration or collapse of downstream ecosystems.”
“India and China are depleting underground sources and relying on river water, which substantially originates from glaciers during times of drought. This will be fine for a few decades because glaciers will keep melting and provide more river runoff, which acts as a buffer to protect populations from water stress. But after these decades, the situation could go downhill. If we do not plan ahead, there could be a crisis for water and food, affecting the most vulnerable.”

Is it not time the ODT had an environment section?

If the Police actually do their job and arrest someone, then perhaps they will stop standing on train lines putting themselves at risk, or the train driver who will feel responsible if they are killed. Or do we wait until that happens? It seems to me that major health and safety and not to mention laws are being broken.

A train can not slam on its brakes and stop instantaneously on a dime. They were fortunate to escape tragic unnecessary death or agonising life-changing injury. If these kids are from among the group of "responsible young people" who participated at the recent Schools Climate March, then it's time for the organisers to implement a re-education programme, with an emphasis on safe and responsible protest action. It's one thing innocently joining a march - and quite another matter to mess with trains! Youthful passions and causes seldom look so rosy from a hospital bed!

For goodness sake, prosecute the fools before someone dies.

As an ex railwayman it beggers belief that these muppets can get away with this.
throw the book at them

If the forecasts are correct, we will burn more coal this year than in the last decade or two because our lake storage is a third down on the pre winter average.
Expect your power bill to be well up this winter.
It's a shame we don't have more gas on tap for these events but I'm sure Australia will be more than happy to sell us some of the coal China is now importing from Indonesia.