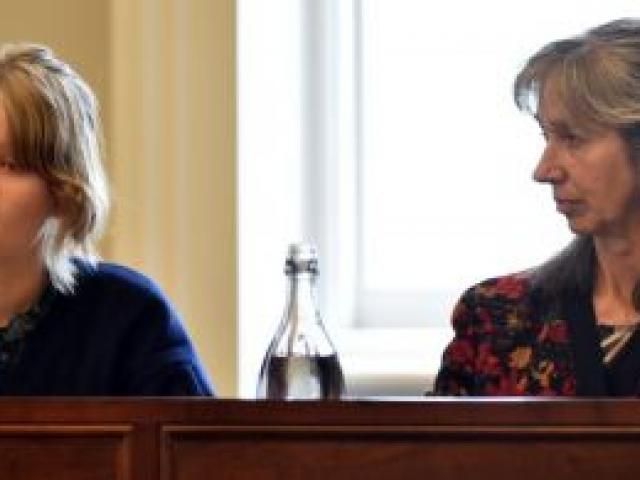 Activist Siana Fitzjohn spoke appealed to the council to ''rework [its] submission on the 2016 oil and gas block offers and strongly oppose oil and gas exploration off the coast of Aotearoa''.

The council recently ended its consultation with Dunedin residents on deep sea drilling. That consultation was carried out before the council presented its submission to the Government on the 2016 oil and gas permit block offer.

Ms Fitzjohn said the council's position on deep sea drilling was ''quite watery''.

''You didn't take any strong position. And we believe the council's stance should reflect the seriousness of this issue.''

She and fellow Oil Free Otago activist Rosemary Penwarden said New Zealand should stop issuing permits for deep sea oil drilling because of the risk of an oil or gas blowout, and especially because of climate change.

''We know we cannot burn most of the already-discovered oil and gas and stay below two degrees of climate warning,'' Ms Penwarden said.

Following Ms Fitzjohn and Ms Penwarden's presentation, Cr Whiley questioned them on how risky it really would be to drill off the Otago coast.

After several minutes of tense back-and-forth debate, Ms Fitzjohn said no matter what was in the reserves, they could not be extracted if the climate was to stay below 2degC of warming.

''Exploring for more oil - or gas - in any situation is completely reckless, if we're looking for a liveable future for future generations,'' she said.

''The submission is on the block offer. And not on climate change,'' Cr Whiley replied.

Cr Hilary Calvert also challenged the pair, asking them why they had come to speak at the public forum when they had already made submissions during the council's consultation process.

''I'm just wondering how appropriate it is from our point of view to add that one group, especially, and an increased petition, unless there's a reason for why you didn't get a chance to get yours in on time.''

''Councillor, that's a question for council to answer,'' he said.

Later in the meeting, the council did decide to rework its submission, but not because of Oil Free Otago's appeal.

Cr Jinty MacTavish said Mr Cull asked the submission to be reworked so it was a direct reflection of the submissions the council had received.

''It conflated a bunch of information the council had received about drilling and some concepts or ideas that weren't necessarily central to the submissions we received.''

The council's reworked submission to the Government would still not be an official council position on deep sea drilling, a point Cr MacTavish said she raised at the meeting.

But yesterday's council meeting was not the appropriate forum to decide on that position, she said.

''We'll look at our alternatives to raise that separately and come to a formal council position on the matter as a separate process.''

• Activist Jen Olsen also spoke at the public forum about the Trans Pacific Partnership agreement (TPP), asking the council to push for a parliamentary debate about the TPP and lobby the Government to assess its impact.

The TPPA was agreed upon by the 12 negotiating countries earlier this month, but it still has to be ratified by Cabinet and have domestic legislation passed by Parliament to comply with the deal.

Ms Olsen's appeal comes more than a year after the council adopted a 12-point resolution outlining concerns about the TPP.

''On behalf of the Dunedin community,'' Ms Olsen said, ''I request that council stands by the 12-point TPP policy solution.''