Terrier Frank tears up the track for win 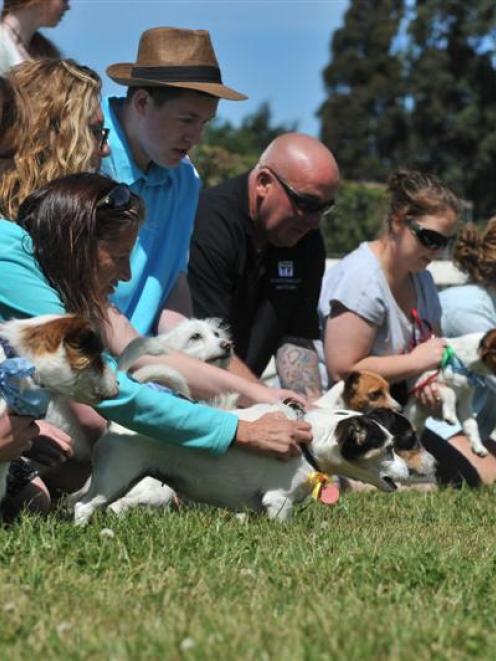 Anticipation builds before the Jack Russell terrier race begins. Photo by Gregor Richardson.
What must surely be one of the fastest terrier dog races in the history of the sport was held in Mosgiel on Saturday.

The 154th Otago Taieri A&P Show feature event was over in just four seconds, after a particularly enthusiastic field caught up with and swarmed all over the rabbit lure within a few metres of the start.

Pandemonium ensued for several minutes, while various attempts were made to retrieve the lure from the pack.

The race was restarted and was won by a 3-year-old Parson Russell terrier called Frank.

That would be the same Frank who caused the first race to be abandoned, when he caught the lure too quickly.

''I was pretty confident he was going to win,'' owner Regan Hall, of Dunedin, said.

''He loves rabbits. He chases them whenever he gets the chance and he can run really fast.''

Several thousand people enjoyed the broad range of demonstrations, installations and exhibitions in sweltering conditions at the Taieri Showgrounds.

Exhibitions of paintings, photography, embroidery and even Lego sculptures were also displayed for show.