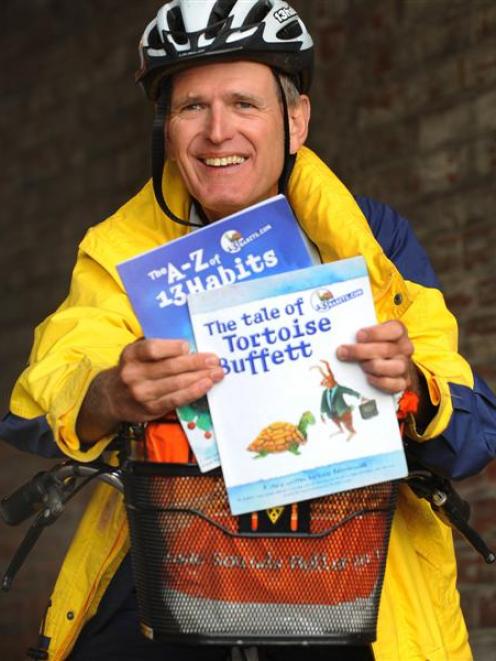 The Auckland man, who worked 15 years as a financial adviser and insurance broker, is touring New Zealand on a bike, presenting in schools picture books he wrote about the 13 habits of US business magnate Warren Buffet.

"We teach maths and English, but why don't we teach financial literacy?"

About 40% of retired New Zealanders "vaporised their life savings", and while he could not help them, he could teach children about the importance of being financially smart, he said.

Over the past two years, he developed three children's books covering Mr Buffet's habits with a message that children were in control of their destiny.

"If you try bombarding them with 13 habits, they go into mental overload, but if you give them a story, they can get into it.

Anyone who would use these habits would have truly extraordinary results in their lives," he said.

Mr Remmerswaal left Cape Reinga on February 12 and has been cycling around the country since. On Tuesday, he visited Karitane and Warrington Schools, and was at Waitati School yesterday.

He expected to finish his tour next week in Bluff.

Schools had given him positive feedback about the books as "there are not a lot of good resources to teach financial literacy", he said.

The next step was to get banks and official sponsors on board so the books could be supplied to all New Zealand schools.

He also hoped to develop interactive games to add to the picture books and a novel which was due for release next year.

"I think if we could be the first country in the world to teach this ... I reckon we could exceed Australia's GDP."