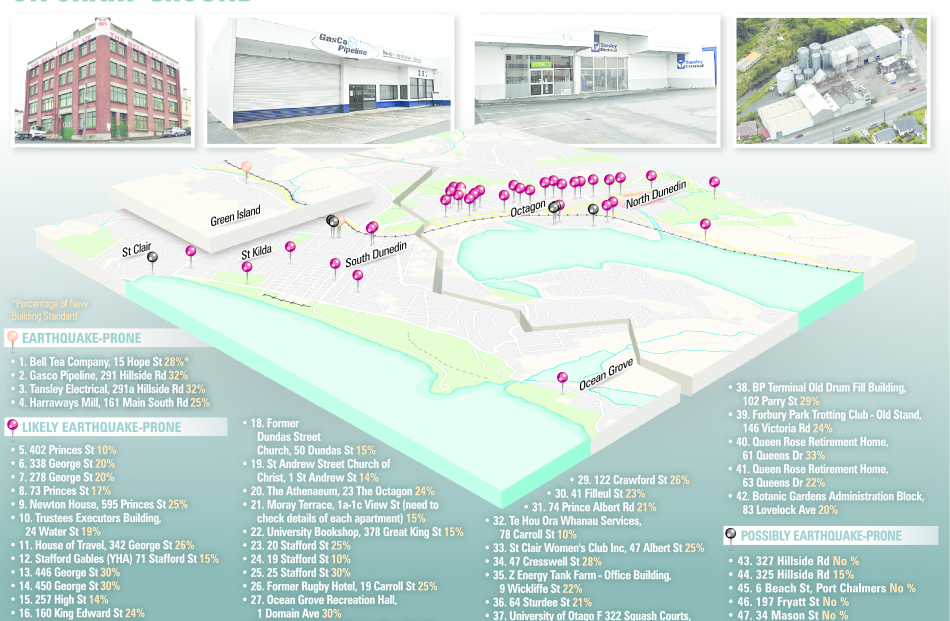 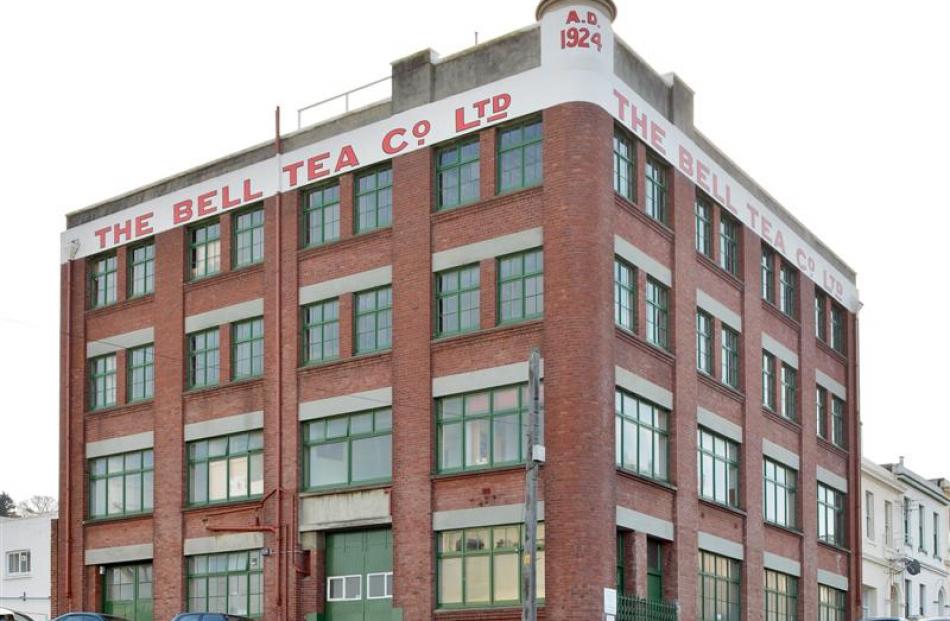 The Bell Tea Co building, one of Dunedin's earthquake-prone buildings. Photo by ODT.

A register of Dunedin's earthquake-prone buildings has been made public for the first time, but it is likely to represent only the tip of the iceberg, the Dunedin City Council says.

Council staff, responding to an Otago Daily Times request, have released details of four earthquake-prone buildings in Dunedin, as well as another 44 considered likely or possibly so.

The earthquake-prone buildings included the Bell Tea Co building, while the University Bookshop, Athenaeum and botanic garden administration block all appeared on the likely list.

So did Stafford Gables, the Queen Rose Retirement Home and the St Clair Women's Club.

Old, unreinforced masonry buildings also featured prominently on the list, including some threatening to crumble during an earthquake and send rubble falling to the streets below.

Council heritage policy planner Dr Glen Hazelton said none of the buildings were considered an imminent danger, but the reports confirmed the risks they could pose in an earthquake.

However, those identified so far were only a small part of the picture, with up to 1000 city buildings likely to require earthquake-strengthening, he predicted.

Owners of all non-residential, pre-1976 buildings had until the end of next year to have their buildings assessed and report results to the council.

The owners of those buildings deemed earthquake-prone would then have between 15 and 30 years to strengthen their properties.

So far, the council had received just 420 of the expected 2900 assessments, of which 372 were deemed not to be earthquake-prone, Dr Hazelton said.

He was aware of at least 300 other assessments that had already been completed, but were yet to be given to the council, making results at the moment ''probably a bit self-selecting''.

''There's probably some people who have got earthquake assessments back that just don't want them in the public record yet, either because they're so bad or they're worried they might affect their tenants, or things like that.

''Some of those will be strengthened. Some of them will just be buildings that are already nearing the end of their life, and will be replaced.''

The council had sought a legal opinion earlier this year on whether it should make details of the council's register public.

That came after Cr Richard Thomson worried the council could face a legal threat if it knew, but did not disclose, information about earthquake-prone buildings in the city.

Auckland Council has so far declined to release its list, despite repeated requests, but Dr Hazelton told the ODT he wasn't ''really that comfortable'' withholding the information.

''For us, there was no justification for not giving it out.''

The register was based on a mix of detailed and initial assessments carried out by consultant engineers since the introduction of the council's new earthquake-prone buildings policy in 2012.

Buildings were deemed earthquake-prone if they were found to be less than 34% of new building standard (NBS).

Those that were risked collapsing in a ''moderate'' earthquake, causing injury to people or damage to surrounding property.

In Dunedin, the four buildings on the council register confirmed as earthquake-prone had scored between 25% and 32% of NBS after detailed seismic assessments, Dr Hazelton said.

The 38 buildings ''likely'' to be earthquake-prone scored between 10% and 33% of NBS, but based only on a consultant engineer's initial assessment, he said.

Owners of buildings deemed ''possibly'' earthquake-prone had decided against getting any assessment, and instead jumped straight to considering whether to strengthen or demolish, he said.

While demolition would be an option for some owners, the ''larger percentage'' were prepared to invest in their buildings, he said.

It was also encouraging to see so much work already under way, and in some cases completed, including in Dunedin's warehouse precinct, he said.

Improvements were also under way on some George St buildings, including the ''millions'' being spent by Oakwood Properties upgrading its Robert Burns Hotel and neighbouring properties.

Work to upgrade the Stavely Building in Jetty St, including earthquake-strengthening, featured in the ODT yesterday.

''I've been surprised and pleased about the number of people who are getting on and doing the work. There's a lot of strengthening going on around town at the moment.''

The projects, once completed, would join a growing list of strengthened buildings that also includes some high-profile projects, such as the Municipal Chambers, Speight's Brewery, Donald Reid warehouse and Knox and Selwyn Colleges.

The University of Otago has also been busy since announcing a $50 million programme for earthquake assessments and strengthening in 2012.

That included closing the earthquake-prone Portobello aquarium and assessing 94 buildings in its property portfolio.

Some - including the west wing of Cumberland College, Linton House at Carrington College and Aquinas College - have since already been strengthened.

Work on others was under way, or yet to start, including Saint David 2, the Scott Building at the Dunedin School of Medicine and the Property Services building.

Dr Hazelton said the council was yet to receive the university's assessments, or those of schools and other government institutions being assessed as part of a national programme.

The total cost of strengthening to owners of buildings remained ''a real moving feast'', with some buildings proving cheaper than expected to strengthen, while others were more costly, he said.

The Bill, if unchanged, would give councils five years to assess nearly 200,000 buildings built before March 31, 2005, including all non-residential and high-rise, multi-unit apartment buildings.

That has prompted dire warnings from councils worried about the cost and the impact on heritage buildings, which they feared would be abandoned or demolished.

Dr Hazelton said he was more optimistic the Government's approach would yet be refined, and the council's policy then tweaked to match.

In the meantime, there were quick fixes for owners that could be addressed sooner, including securing parapets that could fall in an earthquake.

The reports released by the council did not change the risk posed by the buildings, but ''just gives us a better sense of knowing where we could target works'', he said.

• Four confirmed as earthquake-prone based on detailed assessments.

• 38 likely earthquake-prone based on initial assessments.

• Six accepted as possibly earthquake-prone with no assessments.

• Owners will be given between 15 and 30 years to strengthen.

• Strengthening work under way in parts of city; many more owners yet to provide assessments.