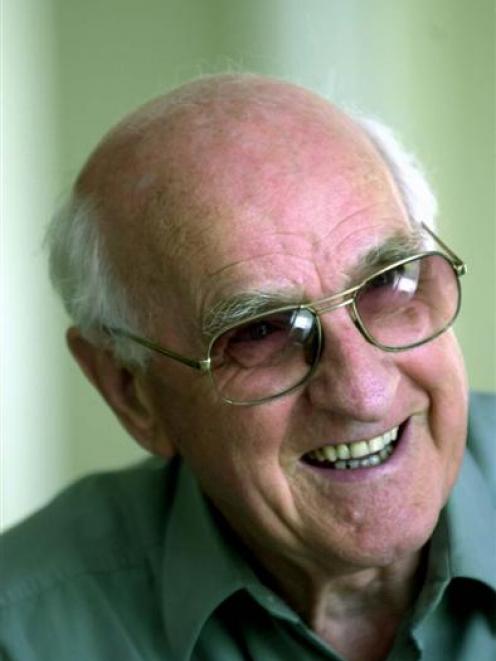 Lloyd Geering (or should that be Sir Lloyd Geering?).
The Government has created something of a dilemma for 85 of New Zealand's most distinguished citizens - including about a dozen with Otago connections.

They are being invited to discard titles of "Mr" and "Mrs" and call themselves "Dames" and "Sirs" instead.

The Labour government did away with the old titles in 2000.

Announcing the return of the titles yesterday, Prime Minister John Key said the move was "about celebrating success".

"The Queen has given approval for the reinstatement of titles. The changes will be finalised and come into effect in time for the Queen's Birthday Honours list in June," Mr Key said.

Those that could be located by the Otago Daily Times last night were far from certain about whether they would take up the titles.

Former principal of the Theological Hall, Knox College, in Dunedin, now living in Wellington, Emeritus Prof Lloyd Geering said making the decision was "not as easy as it sounds".

"The decision one makes reflects upon the other people who make a different decision, and I think it's quite a problem.

"If one simply goes ahead and says 'yes, I'll accept it,' you can be accused of seeking the limelight. If you refuse it, you can be accused of false pride. And because of that, whatever decision one makes, it reflects upon the people who made the opposite decision. I think it's a problem in that way."

Former bishop of the Anglican Diocese of Dunedin, Penny Jamieson, now living in Lower Hutt, said she had not "quite got my head around it yet".

"It just came out of the blue. It's not high on my priority concerns. I'd far rather we won the cricket," she said, with India at that stage 370 for 3.

Lois Muir said friends sometimes, as a joke, used the title when referring to her.

A few, including her late husband, had "felt annoyed" it was not accorded her when she was made a distinguished companion in 2004 for services to netball.

"So I think it's rather nice that I've got the choice to accept the new one or not."

"One never aspires to these things. We obviously don't have to make up our minds in a hurry so we'll just have to think about it."

The Labour Party last night said restoring the titles was a move back towards the British Empire, while the Green Party said the honours system should remain independent.

"We should celebrated outstanding New Zealanders as New Zealanders rather than as part of an outgrown relationship with the British Empire," co-leader Jeanette Fitzsimons said.

NZPA reported that Peter Snell was expected to go with the change and become Sir Peter.

Former All Black Colin Meads told TV3 News he was not sure about using the title.

"I still live in Te Kuiti and all my mates around here might give me a hard time."

One of New Zealand's best known scientists, Prof Peter Gluckman said a title was of great value in gaining recognition when working overseas.

Dr Ranginui Walker said he was not ruling out using the title but did not want to be in the same boat as Sir Michael Fay and Sir Roger Douglas.

"I felt that the knighthood system had been rather denigrated, or degraded."