Tool to help pick the right major for you 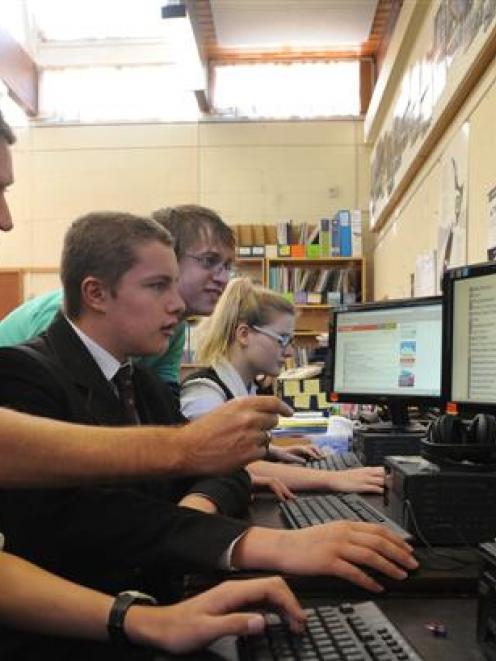 Logan Park High School pupils (from left) Branagh Hender (15), Andrew Brinsley-Pirie (16) and Merlin Callister (16) use software created by the Graduate Factory Ltd at the University of Otago Centre for Innovation which allows them to choose a university major. They are helped by two of the program's founders, Julian Moller (left) and Paul Hansen (right). Photo by Peter McIntosh.
What should I be? These days, it is a $200,000 question.

But now, a group at the University of Otago have come up with a solution to what is one of life's most important decisions.

No Major Drama (NMD) is an internet-based tool that enables users to create personalised rankings of university majors available for bachelor (under-graduate) degrees.

The program is being used widely in the United States and Canada already, and now the program's designers are trialling it at John McGlashan College and Logan Park High School in Dunedin.

Eventually, it is hoped it will be used in all New Zealand secondary schools.

One of the program's designers, University of Otago economics Associate Prof Dr Paul Hansen, said each user's ranking of majors was based on their own personal selection criteria, related to their skills and interests, and their own personal weights on the criteria.

As well as personalised rankings, NMD provided summaries of what each major was about, and links to carefully chosen Wikipedia articles, career opportunities and general information about going to university, he said.

"Education costs in the US can be very high. College students face tuition bills of $10,000 to $50,000 a year - making what to major in for a four-year bachelor degree, literally a $200,000 decision. And there are thousands of possible majors to choose from."

Dr Hansen said inspiration for the design came from concern about the 80% of United States students entering university who were unsure of their major, and the 50% of students who changed their major at least once before they graduated.

The situation in New Zealand universities was similar, he said.

With 106 majors available at the University of Otago alone, NMD's creators hope to help students maximise their academic (and career) prospects, and in the process save them time and money.

"And given the scarcity of educational resources, the decision of what to major in has great national significance," Dr Hansen said.

NMD is free, it takes about five minutes to use and the software is designed to engage Generation Z, or the Net Generation of pupils, who are known for their short attention spans and reliance on social media and the internet, he said.

Logan Park High School pupil Andrew Brinsley-Pirie said he had a few ideas "floating around" about what career path he would pursue.

"But this has helped me to clarify my thoughts. I think it will be very useful."

Fellow pupil Branagh Hender said it was important for pupils as young as year 11 to use the software because they only had 18 months before they needed to decide on a career path.

"I need to be starting to study subjects which will lead on to university study in that area."