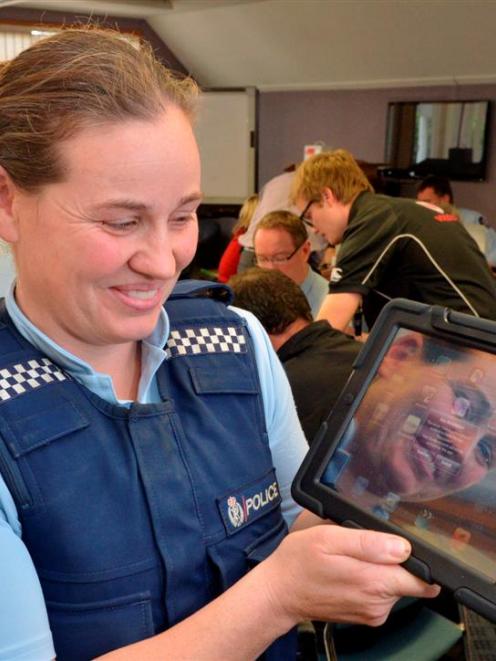 New gadgets issued to front-line officers in Dunedin yesterday will let them spend more time on the beat.

They will use iPhones and iPads to access information from a national database, which they would otherwise have to get from a police station computer or via radio to the police communications centre.

Mugshots, bail conditions, driver licence information, outstanding arrest warrants and fines will be at officers' fingertips, no matter where they work.

The technology, which will provide police with access to detailed maps and work emails, was expected to save each officer about 30 minutes each shift.

Officers in Dunedin, Balclutha and Oamaru were the first in the Southern police district to receive iPads and iPhones yesterday.

In total, 289 Otago police have been allocated either or both of the gadgets, depending on their work requirements.

Throughout the Southern district, 416 iPhones and 239 iPads are being distributed this month.

Nationally, 6086 iPhones and 3900 iPads were allocated to officers through a $4.3 million initiative, which aimed to get front-line officers spending more time in the community.

Officers will have access to two main apps. A mobile responder will enable them to assign themselves to and complete jobs, while an intelligence system will give them access to offenders' details and other information.

''Anything job-wise we can do on our station computer we can now do with these [gadgets] in the field. It's the same information and systems we use, just mobile.''

The iPads and iPhones were password-secure and could be remotely shut down if lost or stolen, he said.

Previously, front-line officers had to use personal cellphones to make calls, and police radios to contact the central police communications service to check people's details.

''There will be no time barrier,'' Mr Marshall said.

In the next 12 years, police plan to spend $159 million funding technology expected to provide productivity benefits worth $304.8 million.