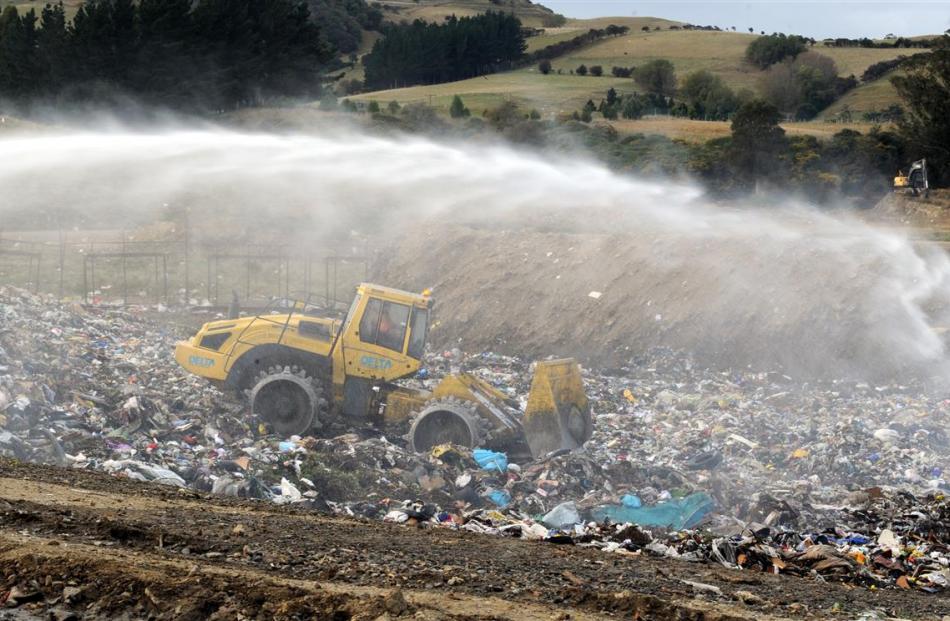 A digger exposes hotspots for firefighters at the Green Island landfill yesterday, after a fire broke out, probably because of hot ashes. Photo by Christine O'Connor.

A fire at a Dunedin landfill prompted fears of toxic smoke but it appeared to go unnoticed by many residents in the area.

The blaze at the Green Island landfill started about 3.20am yesterday and residents were advised by the Fire Service to stay inside and close all doors and windows.

The advisory was lifted about 8am yesterday.

Several Green Island and Sunnyvale residents spoken to by the Otago Daily Times were unaware there had been a fire. City Station Officer Howard Weir said the fire was probably caused by ashes which had not been cooled sufficiently before being taken to the landfill.

He said it was likely a definitive cause would never be known.

‘‘It's a rubbish tip. It's the nature of the business, really.

‘‘The problem that we have with rubbish fires is the question of the toxicity of the smoke.''

At one point, the fire had intensified to the point where five pumps were needed to get enough water, and the smoke was so bad that firefighters needed breathing apparatus, Mr Weir said.

‘‘Essentially, we just try to nail where it's burning, but these things spread,'' he said.

‘‘We can't put manpower on that rubbish pile. It's just too dangerous.

‘‘The plan [was] to expose the surface [under the rubbish] and wet it,'' he said.

A digger was used to move the rubbish and expose hot spots.

‘‘People need to keep any ashes in a fireproof container for a good period of time, to let any ignition disappear,'' Mr Weir said.

Dunedin City Council spokesman Jamie Shaw said the Brighton Rd site was closed until about 10.30am, while the area was dampened down.