Three young Dunedin people will get the chance to develop their leadership skills after they were chosen to attend the Aspiring Leaders Forum in Wellington this week.

Elizabeth Rudd, Tereinamu Hakopa and Dominic Tay were chosen as recipients of a Dunedin City Council and Otago Community Trust annual scholarship, which recognises young leaders in the city.

Thanks to the scholarship the trio joined more than 100 other young leaders from New Zealand for the four-day forum hosted in Parliament, which started yesterday.

Ms Rudd, who is studying towards a double major in human geography and marketing, with a minor in psychology, at the University of Otago, said she was "very excited" to represent Dunedin at the forum.

"I think it's going to be really good to be able to put into words some of my ideas about leadership," she said. 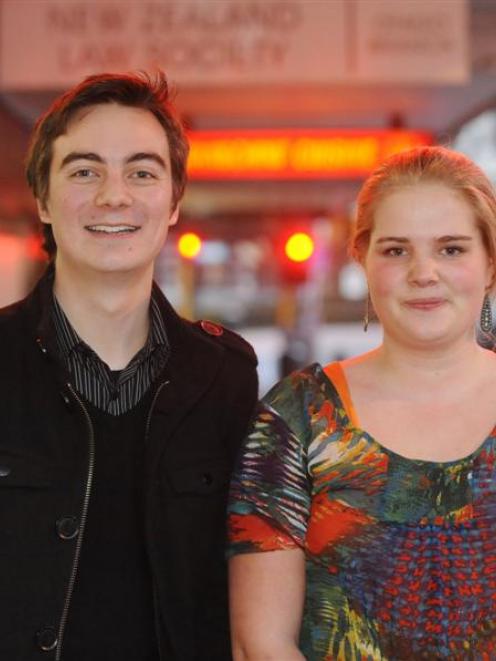 Dominic Tay and Elizabeth Rudd, both of Dunedin, are attending the Aspiring Leaders Forum in Wellington this week after being chosen as scholarship recipients. Photo by Linda Robertson.
Mr Tay, who is studying English at Otago after earning a mathematics degree, said he was new to a leadership role and hoped the forum would provide new ideas.

"I am looking forward to meeting other young leaders from around the country and sharing ideas," Mr Tay said.

Ms Rudd was nominated for the forum by the youth action committee, of which she is the co-chairwoman, Ms Hakopa by Mayor Dave Cull's Tuia Rangatahi Leadership Programme, and Mr Tay by the City of Dunedin Choir and the Dunedin Youth Orchestra, of which he is chairman.

"This annual forum provides valuable networking opportunities for these young people who have indicated clearly that they have high aspirations for their futures," Mr Cull said.

The theme of this year's forum is the "significance of faith and values within the context of leadership".