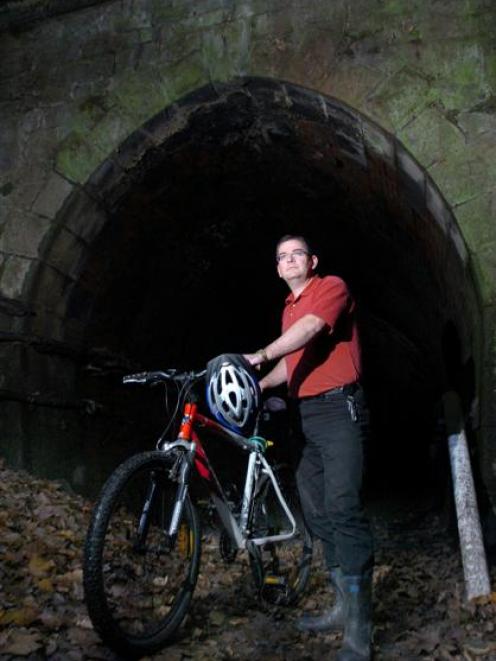 Gerard Hyland is seen at the entry of the old Caversham railway tunnel in this file photo. Photo by Jane Dawber.
The Dunedin Tunnels Trail Trust has asked for a major funding boost to progress work on reopening the Caversham and Chain Hills tunnels to cyclists.

Trust members at yesterday's annual plan hearing told councillors the $30,000 already budgeted by the council for investigation work in 2011-12 should be increased to $300,000.

The extra money would cover the cost of the investigation work, but also pay for the start of work inside the tunnels, including the installation of internal lighting, CCTV cameras and other work.

Trust member Bridget Irving thanked councillors for their support to date to explore options for the tunnels project, but said the $30,000 budget for 2011-12 underestimated how much progress could be made.

She called for the extra funding to be made available to encourage further progress over the next 12 months.

The trust appreciated the entire cost of the project might not be able to be funded by the council, but needed a significant commitment to encourage other funding agencies to also commit, she said.

Trustee Gerard Hyland said the tunnels had been used by walkers and cyclists from 1910 to 2006, when the council added gates to prevent access because of safety concerns, and he had been working to reopen the tunnels since.

While geotechnical work was still required to ensure they were safe for use, the biggest hurdle facing the project was the still-pending commitment from the council to proceed with the project, he said.

Without that commitment, other funding agencies would not commit either, he said.