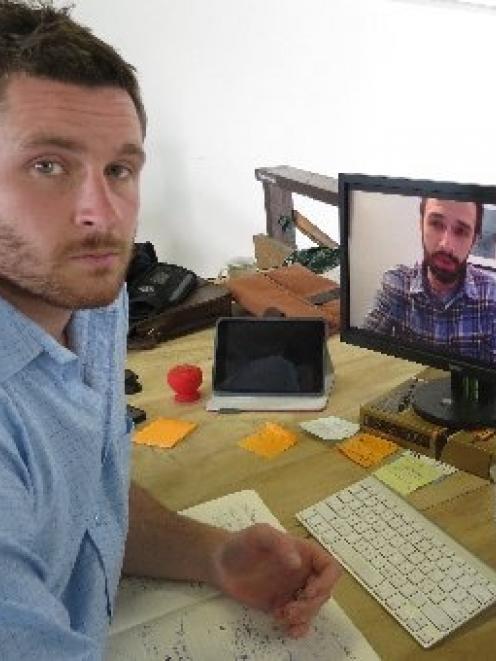 Dunedin Digital Office Gigatown promoter Josh Jenkins speaks to Chattanooga Gigtank co-founder Sheldon Grizzle via Skype to learn about how Gigabit UFB could benefit Dunedin. Photo by Jonathan Chilton-Towle.
Dunedin is in the race to get gigabit internet speeds in a competition that pits it against 49 other places in New Zealand. Reporter Jonathan Chilton-Towle finds out how such speeds improved the fortunes of a US city as Dunedin rallies to become the Southern Hemisphere's first ''gigatown''.

Dunedin has slipped down the rankings in Chorus' ''Gigatown'' competition even as its campaign leaders learned more about how ultra-fast broadband could be a catalyst for social and economic growth.

The city yesterday dropped from the top 10 in the national competition, falling ever further from the top-five finish it needs for a tilt at securing access to one-gigabit-a-second internet.

Gigatown Dunedin promoter Josh Jenkins asked supporters to redouble their efforts - and urged city folk to support the campaign - with a view to Dunedin achieving a renaissance similar to that experienced by other cities overseas.

In 2010, the 167,000-strong city of Chattanooga became the first in the United States to have publicly available, one gigabit internet.

The ultra-fast internet speeds provided a massive boost for connectivity and efficiency for businesses - something that was only beginning to be understood three years later.

According to the Chattanooga Area Chamber of Commerce, about 1000 jobs had been created as a result of the high-speed connection.

The internet speeds had drawn several companies to the city.

Bulgarian company Hutgrip found the speeds allowed it to beta-test its cloud-based monitoring products more accurately than in its home country, while internet search engine Mozilla launched a community fund in the city to experiment, develop and implement learning and workforce opportunities enhanced by the internet.

Mr Grizzle believed high-speed internet would create enormous opportunities for Dunedin and New Zealand although this would take time to happen.

Gigabit-speed internet was ''crazy fast''and its efficiency, extrapolated to the entire community, created many options and would knock on to businesses and people who had no relationship with the internet, he said.