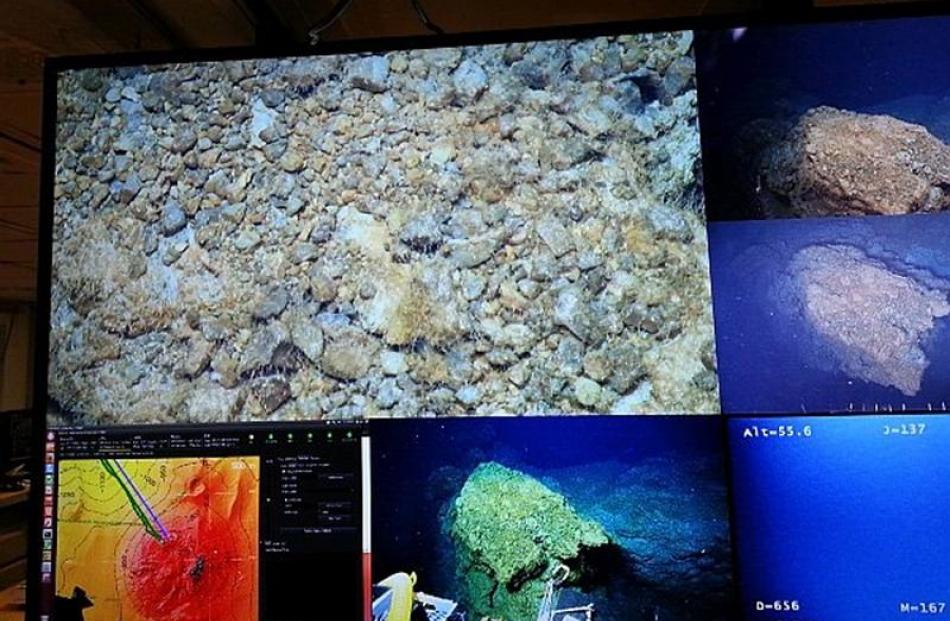 A data screen in a science laboratory aboard the research vessel Roger Revelle shows views of the ocean floor near an underwater volcano. Photo supplied.

A world-first international expedition, including University of Otago researchers, is ending, after scientists gained striking new views of an underwater volcano in the Kermadec Islands.

The research expedition was investigating the biggest recorded explosive eruption of a submarine volcano in history, which in 2012 produced a floating pumice island the size of Israel.

Prof White is aboard United States research vessel Roger Revelle, which is based at Scripps Institute in San Diego, California, and is now heading to Auckland, where it is due to arrive today.

The Havre submarine volcano is about 700km northeast of the Bay of Plenty, and ranges in depth from 650m at its shallowest to 1.6km below sea level.

The Mapping, Exploration, and Sampling at Havre (Mesh) expedition was using two US-made deep diving robotic underwater craft, including the remotely operated Jason, which streams video images back to the surface via a fibre-optic cable.

''This cruise with Jason has been amazing,'' Prof White said on Wednesday. Prof White, Otago PhD student Arran Murch and researchers from GNS Science are among the scientists exploring the Havre caldera - a cauldron-like volcanic feature - to detect changes resulting from the 2012 eruption.

And Prof White would not ''soon forget'' the remote camera views of ''deep-sea crags and cliffs of lava domes and the caldera wall'' and the caldera rim ''haphazardly decorated with giant pumice blocks stacked haphazardly like something from a Dr Seuss drawing''.

Earlier this week Jason came back to the surface for the last time on this trip, bringing with it a big, metre-wide block of pumice, which was secured on deck.

''It was quite a sight coming up with Jason, which looked a bit like a happy dog with a big biscuit,'' he said.

Three-quarters of the Earth's surface was under water and ''rich in volcanoes''.

''In many ways the ocean floor is less well known than some other planets, yet it's close to home, and what takes place there is important to humanity and its future,'' Prof White said.