Uni plans may add to cost of scheme 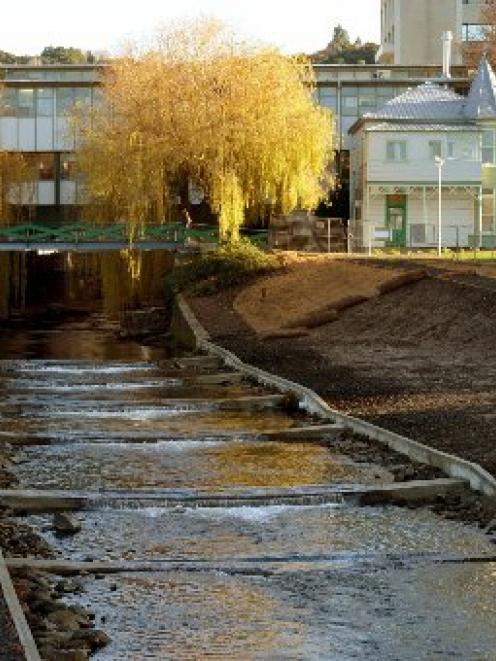 The Information Technology Services building straddles a key point of the Water of Leith, with the newly reconfigured river channel in the foreground. Photo by Stephen Jaquiery.
A cheaper option for easing flooding concerns for Dunedin's central city appears to have been ruled out by the University of Otago's latest building plans.

The university has confirmed it has no plans to remove its information technology services (ITS) building which straddles the Water of Leith ''at this time'', although it was flagged in its master plan released in 2010.

After the plan's release, the Otago Regional Council re-worked its proposed schedule for the $38.3 million flood protection scheme, pushing work on the ITS corner of the Leith back to 2016-17 to allow the university time to make a definite decision on its future.

Last month the university released its property development plan, which listed projects up to 2020, including Leith flood protection work.

However, university property services director Barry MacKay said the university had no plans to move the building at this time and the Leith scheme did not require its removal.

Council natural hazards and engineering director Gavin Palmer said while flood protection work could be done without the building's removal, its removal could have meant lower costs and improved amenity for the area.

''It won't stop the flood protection being done.''

Dr Palmer believed there was still time before the council and university had to make a decision on what form the work would take.

Improved protection along the Leith was needed for North Dunedin, the University of Otago campus and the central business district, to guard against major floods.

The Otago Regional Council approved the latest version of the scheme in 2011 but had been completing work along the Leith in stages since 2006 and was doing work on the stream from the Leith footbridge to Forth St.

The corner, which the ITS building straddles, was scheduled for $2.3 million in work, including the engineering work needed to deal with the ITS, the year before the regional council's consents for protection work run out in 2018.

Council chairman Stephen Woodhead said the council and university were in talks regarding the different stages of the flood protection works.

''Because it's [the ITS building] on the bend it would be easier if it was not there but if it continues to be there we'll work with that.''

He ''couldn't imagine'' the council requiring it to be moved, despite its power to do so on smaller residential properties.

''The costs would far outweigh the benefits because of the scale of the building - it's a multimillion-dollar commercial property.''

The council had developed the scheme into year-by-year steps to give it flexibility to adapt if changes were made to the campus but the scheme would not meet its flood standard until it was fully complete.

The scheme was being funded by targeted rates on landowners in Dunedin city which would increase about 60% from 2011-12 to 2018-19. About 30% of buildings in the area, such as those for health and education, could not be rated by the council for the work.

Contractors had nearly finished the flood hazard work between Leith footbridge and Forth St after hold-ups due to the discovery piles for the work needed to be driven in, rather than being bored because of the type of soil.

''It's what can happen when you are retrofitting works around pre-existing structures,'' Dr Palmer said.

The council was also on track to have plans approved for the work in front of the university's registry (between the St David St and Union St bridges) which was planned for this summer, Dr Palmer said.