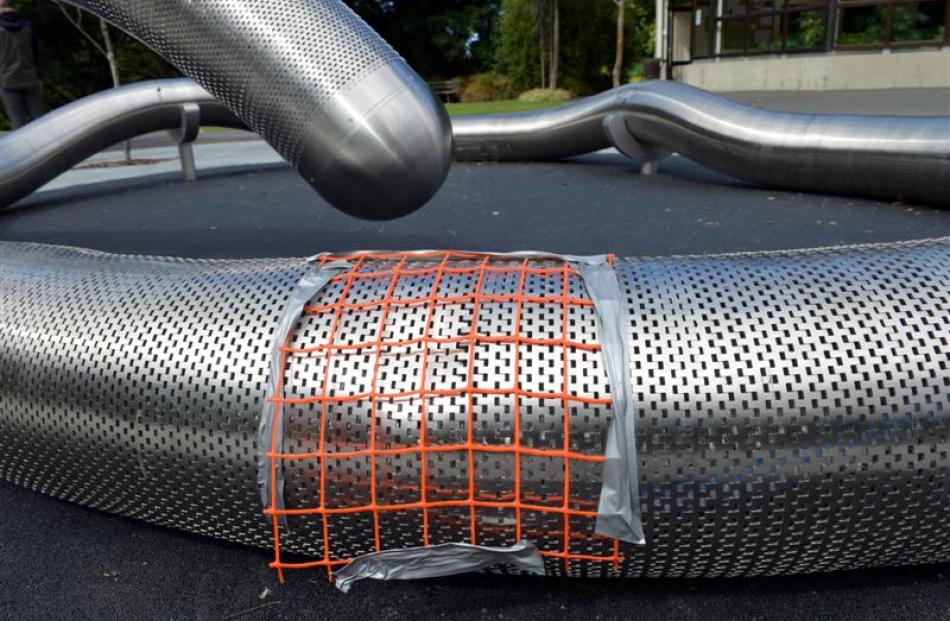 The damaged worm at the Dunedin Botanic Garden. Photo by Stephen Jaquiery.

Closed-curcuit television is to be installed at the Dunedin Botanic Garden after vandals damaged the city's latest piece of public art.

Someone entered the garden at the weekend and put a dint in the steel worm sculpture, also known as Ouroboros. The sculpture was installed in mid-December.

Dunedin City Council parks manager Mick Reece said the botanic garden team had been intending to install security video for some time, but the weekend's vandalism had made it an imperative.

''We are going to get CCTV in there. We can't afford for people to keep on doing that kind of damage. It's not just the worm; that's a pretty central part of the garden and unfortunately we get idiots who, for one reason or another, want to do silly things.''

Some sort of vandalism of the $85,000 piece, such as graffiti, had not been entirely unexpected, he said.

''You get used to people trying to take a crack at public pieces of art, but I hadn't actually thought someone would physically try and damage the worm.''

It was unclear what was used to inflict the damage, but it must been very heavy, as the worm was made of thick marine-grade stainless steel.

Local engineers, who were in discussion with the Hamilton-based fabricators of the piece, were going to try to fix the damage in the first instance, Mr Reece said.

''It's not actually broken, so I'm hoping they can put it right here.''