Venture soon to tee off 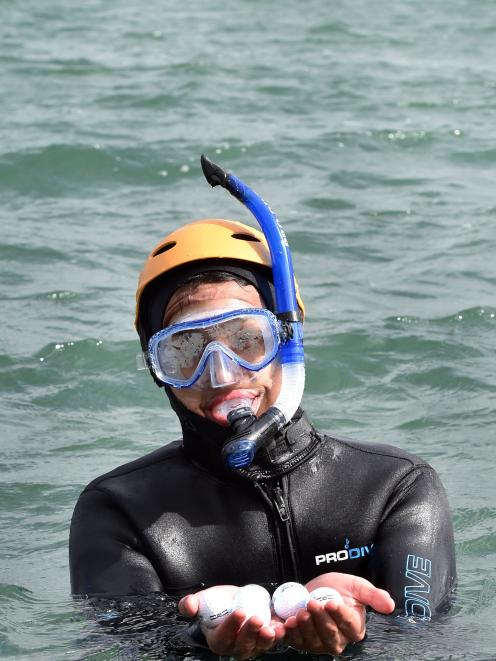 Duncan Campbell is among a team of snorkellers being employed to collect golf balls from the seabed, as part of the Otago Harbour Golf Challenge venture at Vauxhall. PHOTO: PETER MCINTOSH
Dunedin's newest golf venture is almost up and running with some help from Ngati Tuwharetoa.

The North Island-based iwi owns the Lake Taupo Hole In One, a golf challenge which has been operating successfully for 26 years.

On Saturday, iwi member Reg Wall, who helps run the business, was in Dunedin to help train 12 to 15 fulltime and casual staff being employed to run Dunedin's version, the Otago Harbour Golf Challenge.

The hole-in-one venture has been developed on a small reserve just south of the Vauxhall Yacht Club, but also includes kayak, fun-boat and bicycle hire.

Golfers would tee off from there, aiming for a pontoon moored about 100m into the harbour, and stood to win $10,000 if they made a hole in one.

The Dunedin venture carried out a soft launch on Saturday, ensuring staff were up to speed, particularly when it came time to collect wayward golf balls from the harbour seabed.

A team of about seven snorkellers - all of them Dunedin-based students or residents with a mixture of diving and water safety qualifications - would be working, either fulltime with other duties or on a casual basis, to collect golf balls each day.

Mr Wall said he had been asked to come and help out with their training, with a particular focus on health and safety, before the venture was officially operating next weekend.

The aim was to "give them a bit of what we do up there", which could then be adapted for Dunedin conditions, he said.

The Taupo business was a popular attraction that ran without a hitch, he said.

"It's been a pretty smooth operation because it's been going that long."