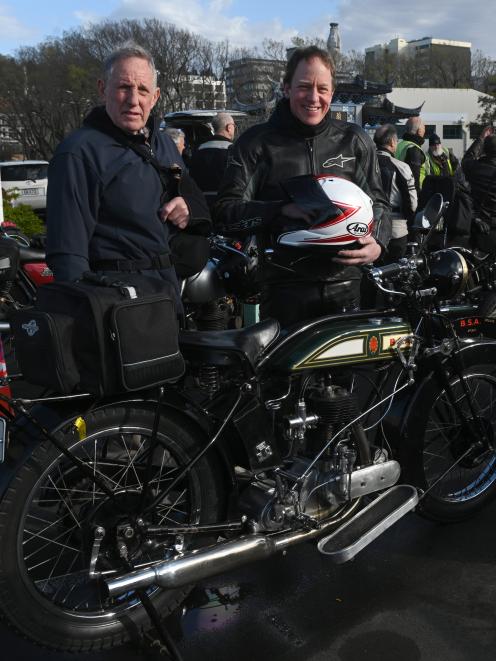 Colin Winter (left), the owner of a BSA 1926 Deluxe motorbike, and his son Gary Winter, who rode the bike at the Vintage Car Club Dunvegan motorcycle rally, meet at the Dunedin Chinese Garden before the rally. PHOTO: LINDA ROBERTSON
You're close to nature but it's too loud to hear the birds when you're riding across the Otago spring countryside on a 1926 "sponge cake" motorbike.

That was what Dunedin resident Gary Winter (46) did on Saturday, riding his father Colin's 1926 BSA Deluxe machine in the Vintage Car Club of New Zealand's Otago branch Dunvegan motorcycle rally.

Troubles are left far behind when you are out on the single-cylinder 500cc bike, travelling about 60kmh and heading for Alexandra on a more than 200km two-day run.

"I had no problems at all," Gary Winter said, when he reached Alexandra later in the day, after lunching in Balclutha.

"It chugs along beautifully."

The rally's 30 riders travelled via Clydevale and Beaumont to Alexandra, returning to Dunedin yesterday.

"They're just good fun- a bit of a change from modern bikes," Gary Winter says of the vintage bikes.

And when you are travelling at roughly half the usual open road speed, you see things you miss when whirling along in a car.

"You see stuff on the side of the road," he said.

Because of recent shoulder surgery, Colin Winter (73) could not ride the BSA, which was his first motorbike. He has owned it for 57 years, since he was 16.

However, he still went along for the ride in the rally's support van.

Before the rally left the Dunedin Chinese Garden on Saturday, he joked about why he sometimes talked about a "sponge cake" bike.

Nearly 60 years ago, the bike's previous somewhat elderly owner, from Taieri Mouth, was happy to pass the machine on to a younger rider, but his mother, Joyce Winter (nee West) had sealed the deal by baking a special sponge cake to "pay" for it.

Branch committee member Bill Veitch helped organise the rally, and has taken part in all 48 of the branch's annual spring rallies.

The rally takes its name from a farm near Clinton, where the rally used to stop for lunch in its first few years.